How appropriate that The Mince Pie Project launch party was held in a place that sells pudding sleeves. I’d never even heard of a pudding sleeve. The name alone conjures up something comforting, sweet and special. 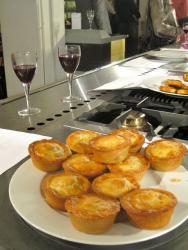 Speaking of which, mince pies are that sweet speciality that only come out once a year. Whether you buy yours at the grocery store, make them yourself or invest something special from a bakery, mince pies mean Christmas is here.

What better way to raise awareness and funds at Christmas time than to get a whole bunch of top chefs together for a mince pie bake off? This brand new Christmas fundraising initiative is the creation of entrepreneur and keen foodie, Peter Butler.

It will take the form of an online auction of mince pies – baked by the best chefs in the land – with each chef’s batch of 50 going to the highest bidder. The auction takes place at www.themincepieproject.com from the 9th to the 16th of December.

Bidders can get regular updates and follow a live leader board throughout the auction week. All the proceeds will be donated to Action Against Hunger and The Jamie Oliver Foundation.

‘These chefs may usually compete with each other for Michelin stars and critical acclaim, but The Mince Project has got them competing over whose mince pies will raise the most money,” says Peter Butler. ‘Will it be Jeremy Lee’s famously buttery pastry or Claude Bosi’s boozy mincemeat? The public will decide.”

The launch party was held at Divertimenti in South Kensington and had a selection of mince pies from participating chefs on offer. Munching on mince pies and sipping on hot mulled wine while browsing the shelves of a food-lover’s paradise was not a bad way to spend a Monday evening.

The website is cute and clever and will show you in real time who is winning the Mince Pie Bake-off, who the chefs are and everything you need to know about the initiative. I’ll be keeping my eye on Claude Bosi, Nigel Haworth and Fergus Henderson’s bids, because if I were in the market for 50 mince pies I would certainly be placing my bid on their pies. 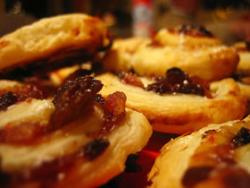 Action Against Hunger – ACF International is a non-governmental, non-profit, non-religious organisation with thirty years of expertise in emergency situations of conflict, natural disaster and chronic food insecurity. It is recognised as one of the leading organisations in the fight against malnutrition. Every year, Action Against Hunger helps nearly five million people in over 40 countries across the world.

The Jamie Oliver Foundation – The Jamie Oliver Foundation is a registered charity whose mission is to mpower, educate and engage as many people as possible to love and enjoy good food. The charity funds the Fifteen restaurant group’s Apprentice Programme, which takes on unemployed and under-qualified young people and trains them to become qualified chefs. Since 2002, they’ve seen 95 apprentices graduate and go onto become professional chefs.