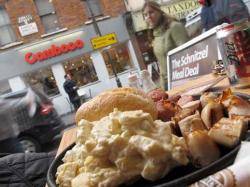 When I was a kid, my dad and I once watched a group of Frenchmen swim out to a rock, pull teaspoons from their scandalously skimpy swim trunks, and proceed to eat sea urchins fresh off the rocks. An elderly German gent watching, the same age as my dad and so also a war veteran, shook his head and turned to him and said ‘Ve should nevair haff fought!’

If we had one thing in common with the Germans back then it was a suspicion of ‘foreign food’ and a glum delight in our own. Since then we’ve seen a revival of our country’s food fortunes but Germany still languishes under a perception of meat, suet and sauerkraut as the only food available.

It’s not entirely true of course, but it has to be said that German restaurants in London are somewhat thin on the ground for some reason. There is the Bavarian Beerhouse, which is great for a beer-fuelled good time and the food’s not bad either, and then there is Bratwurst., the famous sausage of Germany and the cue for some rather bad stereotyping. I’ve eaten Bratwursts in the oldest Bratwurst restaurant in Nuremburg and washed them down with litres of good German beer and they were quite wonderful.

Bratwurst the chain in London has no alcohol licence, but in other ways it has all it needs to make it my favourite place for a quick snack. Prices are not much higher than a certain sandwich shop chain that sells cold, wet, monotasting awfulness and best of all at this time of year, they are hot.

The Berwick Street branch was doing good business when we popped in at lunchtime; the sausages were fairly rolling out the door. One of the beauties of a Bratwurst is that they can be put in a bun and eaten on the hoof as well eaten back at the office or indeed, as we did, on the premises. 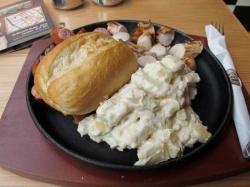 I had potato salad with mine as sauerkraut gives me wind, but you don’t want to know about my problems. I like potato salad, there’s something very comforting about it and this was a good one with tender cubes of potatoes and lots of naughty mayonnaise.

Its coldness went perfectly with my hot classic Bratwurst, as well as a (halal) turkey bratwurst, and the whole ensemble cried out only for a cold beer to make it perfect. The wurst had snappy taut skin and the pork was perfectly seasoned as befits a banger sourced from an award-winning butcher in Thuringia, Germany.

A had the currywurst, a classic concoction of chopped pork bratwurst topped with a sauce made from ketchup and curry powder. Apparently a massive, massive favourite in Germany, it was a bit too sweet for me. The chips with it though were excellent, fresh, golden and crispy.

There are plenty of options at Bratwurst with meal deals of sausages, as well as frikadelle and schnitzels too. With all the hype around street food, mostly stuff from the Far East, it’s worth remembering that closer to home we have a centuries old street food that is none the wurst for being eaten indoors either. Prost!