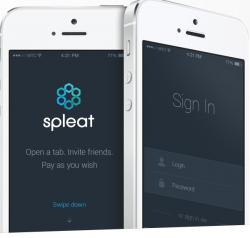 Entrepreneurs Michelle Songy and Charlotte Kohlmann officially launched SPLEAT this October, a free new smartphone app that will change the way we pay our restaurant bills.

As soon as I heard about it I was intrested but also a little sceptical: what is wrong with the way we pay our bills now, could any app make it easier or possibly more complicated?

My scepticism started fading away as soon as I downloaded the app. SPLEAT is very simple, basic app, and by basic I mean it doesn’t have any unnecessary confusing features. It is very user friendly, sign up only takes a couple of minutes, you can simply scan your card instead of manually entering all the details, which,I thought, was a very nice touch.

Once You have it up and running all you need to do is open a tab or join your friend’s tab, inform the waiter you are using SPLEAT and you are ready to order.You can check your bill anytime by simply opening the tab, as items show up immediatelly. Then comes the best part-payment. It literally takes couple of seconds as all you need to do is press ‘pay’.

I found this app incredibly useful as I had to leave unexpectedly, I managed to pay my bill while picking up my coat, which saved me the fuss of finding a waiter and waiting for the bill, which we all know, seems to take ages every time you are in a hurry.

Even though it has been launched only a month ago many London-based bars, restaurants and members clubs have already started using the safe card and cash alternative. They include The Scotch of St James, Dirty Bones, The Fish & Chip Shop, Bird of Smithfield and private member’s club Library amongst others. Once opened app shows you nearby restaurants where you can pay using SPLEAT and enjoy wallet-free night.

The first time I tried spleat I immediatelly saw its advantages and no matter how hard I tried I couldn’t spot any flaws. It would make  life a little bit easier if eventually we could pay using SPLEAT  everywhere, as it not only makes paying easy, but splitting a tab between a group of people only takes seconds.