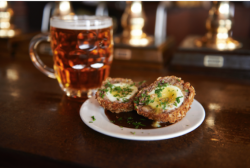 Following the recent success of his kitchens at The Three Crowns in Stoke Newington and The Adam & Eve in Homerton, Cornwall Project founder Matt ChatÃ¯Â¬Âeld, in a new letting from Shaftsbury PLC, is set to launch a brand new offering in the heart of Fitzrovia.

The beer range will include Cornish Tintagel Brewery, craft beer from Five Points and a host of other celebrated guest ales.

Newman Arms will be giving away 500 free pints of beer over its Ã¯Â¬Ârst seven days of opening, details and free tickets available from: