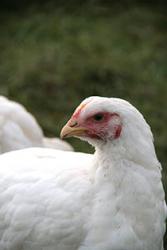 Dramatically different to my first visit to Copas farm for the turkey carving masterclass, my second visit happened on a rainy day, just before Christmas. In blustering winds and driving rain the Copas farm took on a completely different atmosphere.

The turkeys were all gone and the processing sheds had been transformed into festive counters selling everything from condiments to stuffing kits. With deli, wine and of course meat counters, the Copas sales room was full of customers picking up their Christmas Day turkeys. I however, was there not to pick up a turkey, but rather a very special chicken as part of the newly extended Copas range.

Hailed as “the Bentley of chickens” by Hall’s of Hazelmere’s Graham Hall, the Copas chicken is presented in luxury packaging like the turkeys, after receiving a full life of freedom and fresh air, just like the turkeys.  I unboxed the bird with a gasp. It was a monster bird, weighing over 3kg with feather remnants still present in the thick skin poking out of the fatty layers lining the gargantuan breast; a sign of hand-plucking no doubt. 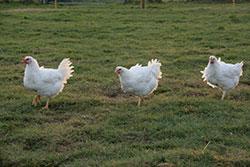 Normally I’d be suspect of a chicken this large, but I trust the Copas gang, and I was confident that this majestic bird was simply allowed the indulgence of time (double that of commercial chickens) to grow large and fat, developing not only a fine grain but a superior flavour.

I roasted the chicken in the exact same way I always do – an onion, thyme and garlic up the jacksie and generously seasoned with salt and white pepper. I wanted to be able to compare apples with apples, or more accurately, chickens with chickens. Feeding a family is not cheap, and so the best I can afford is a freedom chicken from the local supermarket which I roast up almost every Sunday.

The first difference I noticed was the texture of the skin. The Copas chicken was thicker and more robust than the paper thin, defrosted epidermis of my usual chicken. The next point of difference was the colour of the dark meat. This chicken had proper brown meat, not only dark in colour but exceedingly rich in flavour, bordering on gamey. The fat was different too, thicker and less willing to emulsify, I found it difficult to separate the fatty layer for the gravy.

Upon tasting and after a post-dinner discussion panel with the family, we all agreed that the breast was extremely juicy and subtle in flavour,  the brown meat tipping the other end of the scale with a deep and complex flavour – like nothing else I’ve ever tasted with the exception of goose.

Weighing in at over 3kg, my Copas roast yielded leftovers for weeks and a very rich chicken stock. Costing £17.50 and so much more intense than your average chicken, this is not the bird you’ll bring out every weekend, but rather a very special bird, for a very special occasion.