I can’t stand the heat, but here’s no way I’m getting out of this particular kitchen. Not when 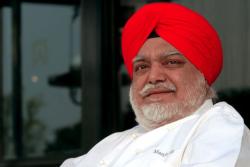 Delhi’s famed Bukhara restaurant has been a stalwart for almost 35 years, turning out the succulent meats and smoky breads so characteristic of Northwest Frontier cooking. Plus, of course, that legendary 18-hour black dahl. So little wonder I’m so chuffed to be privy to a cooking demonstration and sampling right here in Blighty.

The first floor of the Sheraton Park Tower has been given over to a fortnight-long pop-up version of Bukhara– the first restaurant to pioneer the concept of introducing Indian food to five-star hotels. Despite the setting and the fact the Delhi original has played host to a plethora of world leaders, there’s no ‘faihne daining’ rules here. Or cutlery, for that matter.

Bright gingham bibs are provided for those less adept at picking up tandoori morsels and dollops of that dahl with pieces of paratha, naan or roti. Cocky types can go without- but, caveat emptor, turmeric stains are a bugger to remove. The old white-wine trick won’t work with Bukhara Tea, either- a savoury blend of chai and whisky, strong on the cinnamon and perked up with orange slices.

Generosity of spirit extends from the drinks to the portions. Manjit explains that the average restaurant will offer a diner a scrawny 180g of meat. At Bukhara, your chunk of protein will clock in at a hefty 400g. Anything less will end up dry and unappetising. And it definitely won’t promote ugni.

Ah yes, ‘ugni’- the Hindi term for the digestive fire- or in layman’s terms, getting your juices flowing. And we all know the power of smoky, deeply pungent tandoor aromas in that respect. To Manjit, that pungency is the biggest part of the appeal- drawing a differentiation between ‘spiced’ in terms of flavour, and ‘spicy’ in terms of burning heat. He firmly dismisses the notion that food should ever burn in the mouth or the belly.

Manjit Gill comes across as a thoroughly affable chap with strong and somewhat maverick opinions. ‘All that stuff about marinating for 8, 10, 24 hours…. A load of crap!’, he asserts. Any longer and the natural juices are drawn out, the meat has less of its inherent character. JP Singh applies various thick ointments to prawns and chicken breasts, as Manjit explains that, post-marinade, all should adhere and little should be left in the bowl. 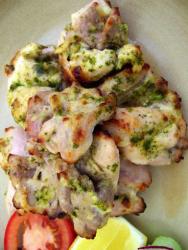 with mild grated cheddar for malai murgh. Manjit sings the praises of pure Desi ghee, expressing infuriation over its mis-classification as clarified butter-consequently bad for the health- when in fact the wonderstuff is made from fermented buttermilk.

With the meat given its short, sharp marinade shock, it’s through to that red-hot kitchen, where the long skewers hang from a clothing rail. Not really, but near enough. Droplets of water dance and hiss as they hit the lid of the tandoor to cool the temperature slightly, then the skewers are lowered, excess moisture allowed to evaporate before the lid is sealed.

Manjit and JP allow the skewered items to cook halfway, then allow the protein to rest before finishing the cooking with a brief blast. A powdered green elixir- ‘kebab masala’, lemon juice and melted butter are sprinkled, then it’s onto the plate and served forth. Wham, bam, thank you Bukhara. Mint-sprinkled pudina paratha envelops creamy-rich chicken and perfectly toothsome prawns, heady with ajwain. Usually an ambivalent omnivore, I’ve come over all caveman.

Until the paneer comes round. Silky-soft with a texture almost of baked custard, each piece boasting a crisp, tangy crust. Star of the show- excepting, of course that dahl, which is meaty, unctuous, and a rare example of a signature dish thoroughly deserving every bit of the hype.

Manjit proudly claims that Indian cuisine has recognised the concept of six tastes for thousands of years- sweet, sour, salt, bitter, pungent and astringent. In India, people talk about food having ‘good taste’ rather than ‘good flavour’. The Sanskrit term ‘rasa’ refers to anything of quality, with exceptional taste. Bukhara? Definitely rasa. Manjit Gill? Resoundingly rasa. And me? Well, let’s just say both the chef and his restaurant have ignited the old ugni.

Bukhara‘s pop-up restaurant is at the Sheraton Park Tower until 1st June. For more information visit www.luxurycollection.com/bukhara or follow on Twitter @bukharalondon

By Foodepedia26 May 2012Articles