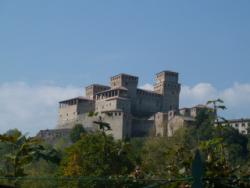 The epiphany sprang while washing my hands. Parma violet soap in a bathroom in Parma! That waft of lilac sweetie hearts from cellophane tubes, symbols of playground affiliation or betrayal, were from this north Italian province that fought Mussolini’s fascists.

Thank you, Maria-Luiga, Duchess of Parma and second wife of Napoleon, whose love for these forgotten flowers maintains Parma as an ancient romantic city and not just home to the European Food Safety Authority.

But of course, violets, Verdi and film director Bernardo Bertolucci aside, Parma and its surrounding region of Emilia-Romagna are most famous for Parmesan cheese -Parmigiano-Reggiano – and Parma ham – Prosciutto di Parma – both of which have seen worldwide sales rocket. Over the last two years, UK sales of Parmigiano-Reggiano shot up by over a fifth while UK exports of pre-sliced Parma ham increased by nearly one third between 2008 and 2010. That’s a lot of grated cheese on our lasagnas.

I was in the region of Emilia-Romagna to watch the production of Parmigiano, whose provenance and processes are fiercely protected under the EU Protected Designation of Origin status. There are around 280 farmers producing Parmigiano. Driving out of Parma City, it wasn’t long before we wound past medieval castles on chestnut and beech-covered hills. 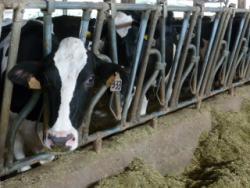 The Parmigiano plant was an unassuming, rose-bricked building from the outside – but what a ferment of scientific activity takes place within! A co-operative of five local farmers owns this dairy, each farmer assigned his or her own vast copper vat in which the morning and evening milk from predominantly Friesian cows is warmed and fermented.

Workers stir the frothy whirlpools at carefully regulated temperatures before a starter of enzyme-rich whey and then rennet are added to begin the fermentation process. You can see which vats have started to ferment because their surface is suddenly still in contrast to the gushing surrounding cauldrons. 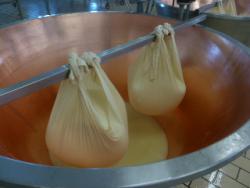 The yellow whey then separates from the curdy cheese solids. Men with giant paddles next bounce the embryonic cheese to the top of the vat while others hook a linen cradle under it. The rugby ball-shaped cheese is dangled from a wooden pole and drained before being symbolically sliced in two to form ‘twins”.

The master cheese maker overseeing all this is on an excellent salary of around €100,000 but he must be present 365 days a year. Today, his dad is ladling the ‘twins” into a plastic mould before they are marked to identify the milk’s originating dairy farm then steeped in brine for up to 25 days for preservation. After this begins the maturation process when hundreds of wheels are aged on a vast library of shelves for at least 12 months and up to three years.

Most excitingly, when the cheese is ready, an inspector with an iron mallet taps the matured Parmigiano to check for sonic faults, hearing holes where gas has entered. By now I was near on fainting to try the cheese, brining and twinning not being my strong points. Luckily the owners had not forgotten I was owed a tasting.

There are three types of Parmigiano classed according to age but these aren’t all common in the UK. Nor is the Parma way of wedging off hunks of the stuff as well as shaving it over pasta like we tend to only do. 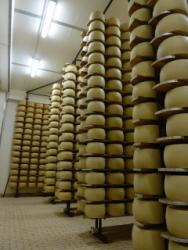 The first, ‘red-stamp” type I tasted was around 18 months old and not only was paler than the others, but moist, elastic-textured and grassy to the taste. The ‘silver-stamp” cheese was 22 months old, dryer and sweeter, a bit like bananas. The oldest ‘gold-stamp” Parmigiano was the most complex. Gold stamps can be over 30 months and this was 30 on the nail. Being a dark gold in colour, it crumbled easily and was almost piquant in taste, spicy with a walnut edge with crunchy bursts of extra-developed protein that are commonly mistaken as salt.

I now have two gargantuan wedges of this delight in my miniscule fridge which I am terrified of eating as I will doubtless scoff the lot and balloon like a Friesian. Or will I become a porker if I eat too much Parma Ham? It’s a hard choice, made no easier by my subsequent visit that same day to a large Prosciutto di Parma plant in the hills.

This place produces 90,000 hams a year, mainly for export to the United States but plants can vary in size. While driving around Parma, it’s common to see boxy buildings with tall, skinny windows that face the sea. When the weather is right – temperate enough but not too humid – the workers at these prosciutto plants throw open their windows to let the ‘il marino” breezes from the coast in nearby Tuscany or Liguria dry and cure their hams.

There are over 160 producers that belong to the Parma Ham Consortium, which protects and promotes the brand worldwide, and nearly 5,000 supplier pig farms. Most Parma pigs are big mammas, belonging to the Large White, Landrace or Duroc breeds.

In true cyclic beauty, it is the whey of Parmigiano that feeds these porkers. And as with the cheese, there are countless controls, many computerised, that monitor temperature and moisture in the production of Parma ham. From the breeder to the slaughterhouse, every ham can be identified by the various penned letters and numbers branded onto its skin. 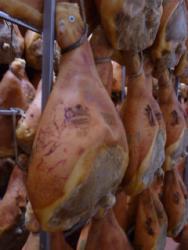 While the manager of this plant insisted the production was artisan – perhaps a little large-scale to my mind – it essentially mimics the centuries-old process that is dependent on specialist knowledge. Making a ham consists of moulding the ham into its drumstick shape; salting, resting, washing, pre-curing, greasing its exposed skin to enable enzymatic activity, curing and branding.

On first entry to the plant, there’s an unmistakable meat smell, after all, these hind legs have come fresh from the abattoir. The meats get progressively darker from room to room as enzymatic activity changes their composition.

We came across a solo woman surrounded by hundreds of leg carcasses using her fingers to grease the cavities around the exposed bones. The grease is a mixture of rice flour, pig kidney fat, salt and pepper – yum – and it was this woman’s job to grease five days a week. Woman, I salute you! She did, understandably, mention that she wouldn’t mind one of the men taking turns at the job occasionally.

The hams have to be a minimum of 12 months old from the start of the process, 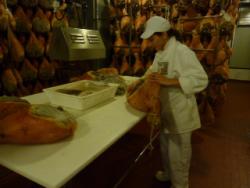 changing in flavour up to the maximum 30 months allowed. Again, my tasting at the end was well welcome, and the fresh-sliced Prosciutto di Parma – 30 months old – crumpled in my mouth like a silk hanky, tasting of juniper berries and the sea. Good Parma ham is supposed to be this velvety. OK, it’s easy to be lyrical about pig’s leg and cow’s milk when in their Italian hillside home but they really tasted good. Get thee down to your deli if not to the home of sweet-smelling handwash and scoff like a heifer.