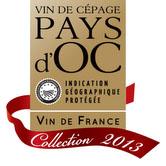 In true French fashion, the annual Pays d’Oc IGP competition bestows gold and silver medals on wines that are elevated to the position of regional’Ambassadors’ for the coming year.  Alan Kingsbury tries some of the 2013 laureates and discovers that, whatever the grape variety, southern sunshine certainly packs the flavour in.

What’s this, a Cabernet Franc; and now a Pinot Noir? Surely not. Cabernet Sauvignon.. OK but who’s ever heard of Niellccio grapes?

I’m opening a mixed case of medal winning wines from this years Pays d’Oc IGP competition and, as far as grape varieties are concerned, it seems that anything goes.

In recent years the Languedoc region of South Western France has massively reduced its overproducing vineyard area to concentrate on quality and style so today its wild and varied terrain has, to some extent, become a laboratory for wine innovation.

From Domaines Anstruc in the foothills of the Pyrenees come two good value wines made with grape varieties usually associated with more northern climates.

Whatever the grape variety, Pays d’Oc IGP wines often have an up-front character with an immediate appeal. In effect, this is France’s response to the New World;  there are so many styles to choose from that it all becomes a matter of personal taste.

The silver medal winning Domaine Camplazens, Grenache 2012  (£9.95 Sante Wine Imports) is a fat’n jammy red from the La Clape area that proves too much for my palate. Likewise the Domaine Camplazens, Viognier 2012  which, with its superÃ¢â‚¬â€œintense white peach profile, steps hard on the flavour’volume pedal’.

Big can be beautiful though, as demonstrated by my favourite of the IGP reds, the wonderful

Domaine Natura Ã¢â‚¬Å“NÃ¢â‚¬Â 2011 a Syrah / Grenache  blend that is shortly due to be released on the U.K. market.

“N” is a heavyweight for sure; but it’s beautifully balanced and reveals lip-smacking chocolate cherry liqueur and orange peel aromas with engaging persistence.

At the other end of the spectrum comes a delightful rosÃƒÂ©, a worthy gold medal winner, confidently dressed in a tall bottle with a neat glass stopper.

Domaine du Grand Chemin. L’Incroyable 2012 (£7.95 Vin Neuf) has a discreet mineral and cranberry nose followed by a rewarding palate of pomegranate and rose which is elegant and full.

Many lesser rosÃƒÂ©s have little to offer after the first taste but L’Incroyable has a persistent creamy texture that carries its aromas long and far.

At only £7.95 it’s a’no-brainer’ really and I enjoy every drop with a very simple plate of quality smoked salmon and rocket salad with a sprinkling of lemon and black pepper.

An unusual migrant to the Languedoc region is the Nielluccio grape which is mostly seen on the island of Corsica. Domaine Les Terrasses de Gabrielle have bagged a gold medal for their curiously named Ã¢â‚¬ËœPour Une PoignÃƒÂ©e de Raisins’ 2012 (UK distribution pending). Here the Nielluccio has delivered a taught, medium bodied red with firm tannins and strident acidity which perfectly suits mediterranean cooking that is rich in tomatoes.

The production of single variety wines is very much in vogue at the moment. Who would ever have thought of a 100% Cabernet Franc emanating from the Languedoc an few years ago? However, ‘new kids on the block’ Domaine Gayda make a very good hand of it with their succulent Figure Libre, Cabernet Franc 2011 (£11.35 New Generation Wines) an organic wine with bright violet and raspberry notes over incredibly soft tannins.

Pays d’Oc IGP wines tend to have rather assertive personalities compared to their northern counterparts and, outside the constraints of the old ‘appellations controlÃƒÂ©es’, diversity really is the name of the game.

These are just a taste of the 57 wines that were put before the grand jury this year and one thing’s for sure; they’re great fun to try.