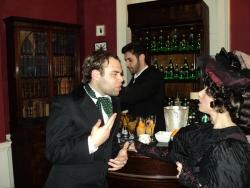 Not being familiar with Fitzrovia, I didn’t know Fitzroy Square, but what a contrast to the hurly-burly nearby Tottenham Court Road. A beautifully-preserved Georgian square, it’s something from a bygone era – I half expected the cast of Oliver! to come bustling into view and burst into a rousing chorus. But enough of my febrile imaginings, we were there for the launch of Perrier Nights, a planned series of exclusive mixology events in London.

On arrival, we were ushered into the Perrier lounge; decked out in bottle green drapery and mood lighting, it created a sophisticated but comforting ambiance. To get in the mood, we tried a couple of cocktails; a Whis-Per (Scotch and Perrier – do you see what they did there?) was interesting, though unlikely to convert anybody indifferent to Scotch. The apple martini was much more my thing, nicely tangy, and with a bracing hit of grated ginger, it slipped down very easily – as did its siblings. Nibbles of goats’ cheese tart, marinated salmon, tuna with wasabi (a real sinus-clearer) and beef with horseradish were all very good, and accompanied the drinks well.

We were soon summoned into a corner of the lounge, where we met ‘Doctor Perrier’, our host for the next hour, and ushered through a doorway into 1905, which isn’t something that happens every day. This was the year that Perrier was given the royal seal of approval by Edward VII, and in a splendid Edwardian drawing room, we were invited to don suitable attire and to help mark the occasion with celebratory cocktails and by composing (and – horror – singing) a jingle. I’m not sure a career-change is on the cards. 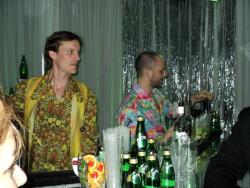 Next, 1973, and it’s disco time. This was the time when Perrier really started to push its marketing into new territories, including the UK. At the risk of aging myself hideously, I remember the first advertising campaigns, and thinking how strange that people might buy water. Oh how things have changed. We tried just the one cocktail, a very 70s creation comprising vodka, framboise, crème de menthe and Perrier. I thought it was grim; I blame the crème de menthe, but it was like drinking fizzy mouthwash. There were other cocktails to try, but my taste buds were in an uproar and needed a bit of down time.

And finally, we were ushered into the modern day, courtesy of award-winning mixologist, Laurent Greco. In laboratory-like surroundings, Laurent in his lab coat gave us modern day alchemy, using Perrier to create some terrific visual effects and bang up-to-date cocktails. One of the highlights was when Laurent perched a cloud of candy floss into a martini glass, which he then doused with Perrier. The candy floss collapsed, Wicked Witch-style, into a vivid pink liquid. For me, it worked better as a spectacle than a drink, as it was – unsurprisingly – very sweet, but as a bit of theatre, it was good fun. He later capped it with an explosion of dry ice which swirled around us like an Edwardian pea-souper, bringing us pretty much full circle to our arrival.

All that remained was to head back to the lounge for a final martini, which really hit the spot, not that the spot needed much hitting by this time. While public singing and ersatz discos aren’t really my thing, the whole evening had been carried off with great élan, and had been good fun. But for me, the most interesting thing was to experience Perrier as a cocktail ingredient; it gave an interesting twist to the drinks we tried. For details of future Perrier events, have a look at www.Facebook.com/societeperrierLDN or on Twitter, @societe_LDN. And for cocktail inspirations, check out www.societeperrier.com for some cracking cocktails to try at home or on the town.