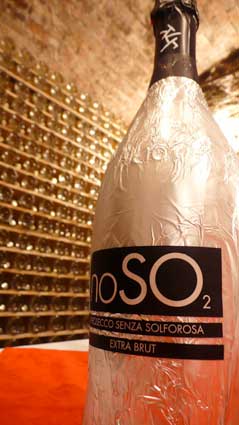 Our man wih a taste for vin Douglas Blyde looks beyond the bubbles in the land of Prosecco. A cheap alternative to champagne? Maybe we’ve been drinking the wrong stuff

‘Prosecco has become Prosexo” purred producer Bisol’s venerable PR, Dacotah Renneau. I smiled, admiring her rhetoric, but secretly thinking differently. In my Champagne snobbery, anything pressed from the Prosecco grape was little more than cheapish party ammo: easily pronounced and therefore easily ordered, sipping somewhere between Alka-Seltzer, soda and shaving foam. A Paris Hilton endorsed buttress for the ‘Bellini’, originating from the foothills of the Alps, now reproduced like a commercial cover of a classic song on Italy’s lesser sites, as well as South America, Asia and Australia.

‘You’ve probably tried the wrong stuff,” said an Italian friend on hearing my jaded sentiments.” He often told me how his family used to make ‘buonissimo” Prosecco from the increasingly steep hills between the towns of Conegliano and Valdobbiadene – a kaleidoscope of greens just 30 miles from Venice. ‘Real Italians don’t have time for burly foreign imitations and realise that much of what is made on the fen-flat foothills stretching all the way to Slovenia is merda…”

With that in mind, I accepted an invitation from the Consorzio di Conegliano-Valdobbiadene, who are responsible for reinforcing the wine’s identity. They were in an optimistic mood, celebrating 40 years of protected origin status whilst announcing another overhaul. As with the Douro, UNESCO appeared poised to grant the vineyards world heritage status. And as of the next vintage, wines produced outside the Veneto would be forced to use the grape’s unglamorous and unappetising ancient synonym, ‘Glera’ for European sale. With prosecution the alternative, this is move which effectively trounce the competition. 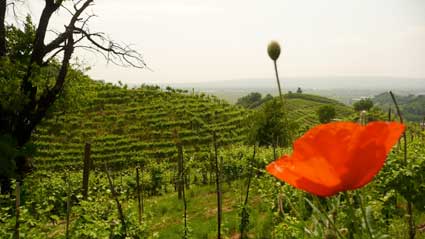 ‘Up here it takes 150 hours a year to cut an acre of grass,” said Enrico Valleferro, Export Manager from Adami estate. ‘Down there,” he gestured to land outside the Consorzio’s control, which was once seabed then forest, ‘it takes eight. But the vines don’t work as hard, the yields are higher and the terrain less ventilated and therefore prone to mildew.” We had driven quite fast along fragile tracks to a steep, sunny, vineyard-rigged amphitheatre. A mixture of old and new vines clamoured to the sky, their roots binding terraces buzzing with crickets and teeming with butterflies. Not inappropriately, Prosecco happens to be a thirsty variety and the sheltering Dolomites conveniently regulate rainfall. This fine wine friendly terrain must make backbreaking work. Regardless, locals toil the patchwork of castle like mounds ‘for the love it,” said Enrico, ‘absolutely refusing to sell” their often tiny plots.

Aside from proud peasants and decent weather, the Conegliano-Valdobbiadene region boasts two further assets. It is home to Italy’s first winemaking school, founded in 1923, and the revered hill of ‘Cartizze’. At 1,000ft high, 160 owners control the 260 acres of this vertical suntrap. It is reputed that a single hectare can fetch over a million Euros – if anyone would sell, making it one of Italy’s most valuable vineyards.

Having thankfully walked down, rather than up it, my thirst for the revered wine was quenched at ‘Villa Sandi’. The estate’s emblem is the Palladian palace with its candy like Murano chandeliers. A reminder of a time when Venetian nobles sought refuge within these hills from Venice’s oppressive humidity. Being made from particularly ripe grapes, Cartizze wines tend towards sweetness. Sandi’s had an inviting nose of pear blossom, giving way to a characteristically chalky, Bitter Lemon stained palate. 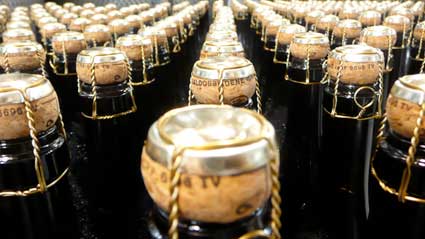 Making a Meal of Prosecco

I wondered what foods it would work with. Venetians generally partner Prosecco with ‘cicchetti’ – little stuffed bready parcels shaped like these hills. But an impeccable lunch at the splendid Castello di San Salvatore provided a real eye opener into its versatility, where seven of the regions top chefs had devised a flamboyant menu

Incidentally, the most popular style of Prosecco is ‘Extra Dry’, which confusingly, tends towards being slightly sweet. Continuing this twisted logic, ‘Dry’ is the sweetest style. If you actually seek less sugar, buy ‘Brut’. Made by two sisters and a philosopher turned enologist who happens to look like an Italian Jamie Oliver, producer Sorella Bronca’s version added a precise, citrus vibe to a croquette canon ball of salt cod and crystallised lemon peel, designed by Chef Giovanni Ciresa of Venice’s Hotel Bauer.

Considering Prosecco’s popularity not only as an anytime, anywhere Italian staple, but increasingly the world’s aperitif, I was surprised to learn that it used to be almost exclusively ‘tranquillo’, or still. Whilst the grape dates back to Roman times, and even lends its name to a village, it wasn’t commercially available as a sparkling wine until after the Second World War. Apparently locals grew to love the hazy spritz when some bottles spontaneously re-fermented come the warmth of spring.

Whilst a little of that style remains, the best of today’s Prosecco is freshly fermented to order in pressurised tanks. This process is different to Champagne, which gets its bead of bubbles from hungry yeast added to the bottle you buy at least 15 months before. Prosecco is therefore cheaper to produce, always delivering a youthful, fragrant fruitiness rather than Champagne’s yeasty, toasty richness. Deliberately a less formal drink, it is best enjoyed from of a wide brimmed glass. A producer told me, ‘putting Prosecco in a Champagne flute is like caging a tiger.” 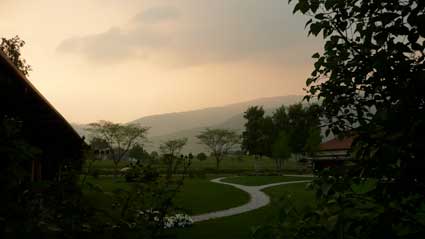 Over a long weekend, I had ingested my weight in bubbly wine. Whilst the best examples had a directness and minerality not seen outside the region, I still found them flirtatious – never quite satisfying my need for something more pervasive. I wondered whether all the toil upon those deceptively restful looking, balmy hills was worth it. ‘Absolutely,” said Giancarlo Vettorello, Director of the Consorzio. With shades of the proverbial outwardly calm, but actually furiously paddling duck, he added, ‘If we didn’t all work so hard, the wine wouldn’t taste so effortlessly enjoyable. That’s our skill.”

It was time to leave behind Italy’s blazing sunshine and board the Blighty-bound plane. On the way back, glancing from a plastic-looking sandwich packed in a factory, to the clouds outside which signalled an imminent entry into British airspace, a strange thing happened. I began to crave a glass of the pretty, polished, only moderately alcoholic wine that I had played at resisting.

I wanted, urgently, to taste those hills again…