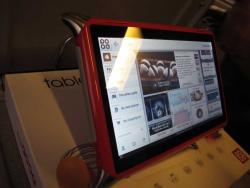 QOOQ, it’s not easy to pronounce, it sounds like you’re violently clearing your throat.’It’s Cook actually,’ explains one of the team at QOOQ HQ in Paris as he demonstrates the device.’In French Q is a K sound’.  Ah well that explains it. Shame no one in marketing thought that one through, though.

Anyway, it is indeed as he says a very French product with software and the physical device proudly made in that country. What is it? Well it’s a tablet, like an iPad or Surface or any of the other must-have devices we see flooding the stores. Unlike them though this is a focussed device, focussed on cooking.

Slightly deeper than a standard tablet, it’s been built to take the rigours of a kitchen. The 10Ã¢â‚¬Â screen is thick and toughened, the case is waterproof, wipeable and shockproof, while flexible seals cover the ports for Ethernet, SD card and USB2. It has a robust built in stand to hold it at the right angle on your worktop and it has little rubber feet so it won’t skate away when you tap the screen.

Inside is where the really clever bit is. A thousand or more preloaded recipes from top chefs many of them Michelin-starred, all searchable by meal type and by ingredients. So far, so like an app you could probably buy for your existing tablet. But wait. 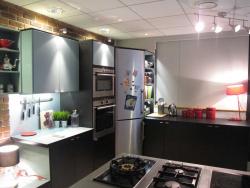 There are the videos that go with the recipes. Not scrappy YouTube type ones but professional HD multi camera videos made in QOOQ’s own studios by the featured chefs working in a mock-up of a home kitchen. Each video is coded to the cooking instructions so that when you touch a sentence in the’how to’ the video immediately cuts to that section.

This is rather cool and clever, making mastering any tricky or misunderstood bits very easy indeed. Just watch that section again, with no fiddling around trying to move a timeline on the video.  A quick tap and voila!

So pick your chef recipe and go to’ingredients’. Already got some of what you need in the house? Then check the tick box. When you’ve finished the QOOQ will send the list of what you need to your email address, or if you have a wireless linked printer in the house you can print straight out. The more you use the gadget, the more it learns your style of cooking, likes and dislikes. 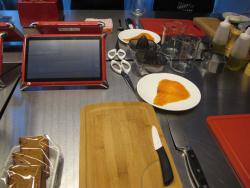 Go a fridge full of odds and ends? Then tell QOOQ all what you have and it will scour its on-board database, and also via Wi-Fi its home planet, to come up with a range of suggestions. You can narrow the search to exclude anything you’re allergic to or simply don’t like, by seasonality or by overall price. Tell it the number of people eating and it will auto adjust recipe amounts, meaning no more mental arithmetic and the possibility of a major mistake. You can also search by cuisine type, ethnicity and style such as Bistro or Michelin.

On screen are count down timers and clocks with alarms that are all very useful. It can play music through its stereo speakers from your MP3 library while you work, and you can also play films on it while you wait for something to bake, boil or burn. 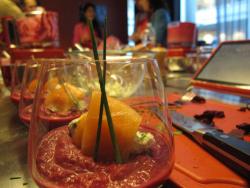 Every month the QOOQ updates itself with more recipes from the web via a subscription and you get a bespoke magazine pushed to you as well. You can add your own recipes to it and share with other QOOQers through its on-board access to Twitter, Facebook etc. You can also browse the web with it, just like any other tablet.

I played with one at QOOQ HQ, knocking out some beetroot soup with goat’s cheese from the on screen recipe by Farida a well-known French food writer and TV chef and author of Les coups de food de Farida. This was a bit daunting because Farida herself was standing next to me watching my efforts. I say my efforts but luckily Qin Xie was sharing the cooking duty and she’s much better at it than I am, although Farida was impressed by my dicing skills and liked our result. 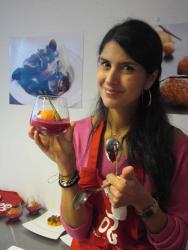 There are some odd bits that need addressing; the French chefs are nearly all unknown to Brits, there are some subbing issues – my menu said dill while the video and voice over said chives – and the VO is a rather robotic, satnav style, American woman.

The QOOQ is regularly updated though and any small errors or omissions will be fixed and enhancements will be carried out based on user feedback with more UK chefs coming aboard. Tec experts say it’s rather underpowered for the money, but then to be fair it’s not supposed to be a rival to an iPad or the other general purpose tablets.

Thee QOOQ comes in red, cream or black and costs £289 plus monthly subscription, which is not cheap obviously, but you either have that kind of money to spend on a nice gadget or you don’t.

I rather liked it and it had a lot more going on inside than I had time to try. If you tend to use your laptop or tablet to cook from in the kitchen, and more and more of us do, then this is a natural evolution and the next step in qooqing.

The QOOQ tablet can be bought direct from their website www.qooq.com/en/