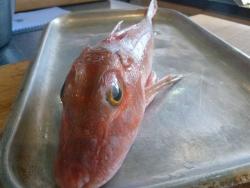 They call it Padstein, the part of Cornwall that is forever Rick. Anita Pati heads down to take a lesson in fish love at the Seafood School and comes away a wiser woman in the ways of piscine preperation

Gurnards, gurnards everywhere and not a jot to eat. Despite their Neanderthal gurn and comic pouts, we had travelled hundreds of miles to eat these, some of the freshest fish available on the North Cornwall coast.

We had descended on the picturesque fishing village of Padstow, otherwise known as Padstein, for its multitude of Rick Stein establishments. Our mission? To fillet, fry and frolic at Stein’s Original Fish and Seafood course. But that was tomorrow morning; tonight we’d planned on a fish and chips dinner. Who would have guessed though that Stein’s Fish n’ Chip shop and the local chippy both shut at 8pm? Being pre-Easter season, the village was as silent as a Cornish cliff. So despite being in one of the country’s fishiest locations, we had to settle for a Chinese takeaway. 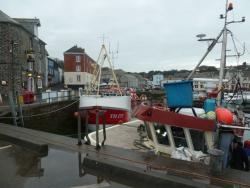 However, chicken and cashews splayed on the floor of a comfy, four-postered room above The Seafood Restaurant consoled us. Many attendees on the course spend time accommodated in one of Rick, and ex-wife Jill, Steins’ rooms pepperpotted across the village. From ours we had a partial view of the working harbor – busy with industry – and a rather unpretty but vital lobster hatchery.

But we didn’t have too long to luxuriate because at 8.45am we were expected just a short walk up the road at the Seafood School where our one-day course would begin. 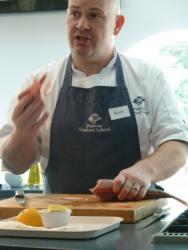 Our tutor for the day was to be senior chef lecturer at Padstow Seafood School, Keith Brooksbank, a deadpan, dry but funny Yorkshireman. Brooksbank was at Scarborough Catering College with TV chef James Martin, and like him he voraciously promotes the use of butter and anything else unhealthy as long as it’stasty Ã¢â‚¬â€œ a pretty sensible approach to my mind Ã¢â‚¬â€œ as well as eschewing lettuce Ã¢â‚¬Å“Men in the North don’t like lettuceÃ¢â‚¬Â. As a salt-lover myself, I was also pleased to hear that, Ã¢â‚¬Å“Rick’s pinch of salt is one teaspoonÃ¢â‚¬Â.

Brooksbank, who has worked at the Seafood School since 2010, began the day by giving the twelve of us students an introduction to knife skills Ã¢â‚¬Å“I sharpen my knife 20-30 times a dayÃ¢â‚¬Â; Ã¢â‚¬Å“use a flat and flexed knife to filletÃ¢â‚¬Â, before starting us on the first of four dishes we were to cook Ã¢â‚¬â€œ mild potato curry with turmeric and mustard seeds topped with grilled haddock and poached egg. 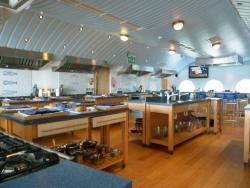 OK, not the most elaborate of dishes but he says this is because, like Rick, he likes to keep foods simple. He names some neighbouring Michelin-starred Cornish gaffes, which, despite serving good food, he finds a little too intricate.

Ã¢â‚¬Å“Simple food is harder to do because there’s nowhere to hide,Ã¢â‚¬Â he says. Ã¢â‚¬Å“Rick told me off the other day for chiffonading the basil. He said it was too cheffyÃ¢â‚¬Â. Chiffonading, we discover, is just shredding Ã¢â‚¬â€œ quite a posh word for a Yorkshireman. And he doesn’t like Ã¢â‚¬Å“smears and swipesÃ¢â‚¬Â on plates either, especially chocolate sauce: Ã¢â‚¬Å“Just give me a jug of it. And foams. I hate foams.Ã¢â‚¬Â 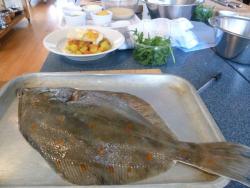 OK, he’s good with his anecdotes and RickSpeak but it works, and makes for an entertaining day ahead.

The day does yield some interesting facts such as anything grown under the ground is put into cold water to boil, while overgrounders should be plunged into hot.  And that which we commonly think of as grills on our ovens are in fact salamanders. These emit heat from the top while grills give off heat from the bottom, like a BBQ. So that’s at least two right answers in the next pub quiz.

He’s a chatterer, this Keith. Anyway, the first dish, the mild curry with haddock and egg while a bit messy-looking turned into a very pleasant late breakfast.

Throughout the day, we were shown fish skills; from how to tweeze out pinbones in the cold-smoked haddock, to filleting flat fish (plaice) and round fish (gurnard), prepping and dressing lobster, tiger prawns and crab for a plateau de fruits de mer, and finally eating it. For the squeamish, beware some gruesome demonstrations such as murdering the crab by driving a thick skewer between its eyes, and sending a gesticulating lobster to its bubbling, boiling end.

There were four food pit stops as we worked through our dishes: chargrilled fillets of plaice with preserved lemon couscous and chermoula; a delicious red gurnard with garlic and sage butter (lots of it); and a prawn and fennel risotto smothered in lemon oil.

While this was all happening Keith advised us not to wash fish, because it just soaks it with tasteless water, to present fish skin side up always (common knowledge but a useful reminder), outlined the difference between blonde and brown stocks, and informed us that, Ã¢â‚¬Å“gurnards get very gassy then blowÃ¢â‚¬Â which is particularly useful to know when packing them in your designer shopper.

I also didn’t know that a prawn’s liver is in its head, apparently. After the wine appeared with our third dish, I must admit I kicked back and stopped trying too hard to get the food right (admittedly this is a lie, I never tried that hard in the first place) but that doesn’t matter on a course as relaxed and informal as this.  They also give you a particularly informative folder with much fish and general kitchen information, if you’ve partaken a little too heavily of the winkles.

As I left and mulled over yet another Brooksbank fact: that scallops have 60 eyes, no brain and can just make out shadow, I realised that seafood would never taste as innocuous again.