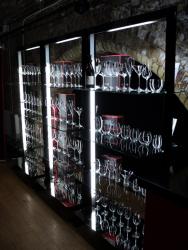 Riedel crystal has a history dating back some 250 years. It has always been a family owned business and is currently in the hands of the 10th and 11th generations of the Riedel family since the business was founded. It was in the late 1950’s that Claus Riedel, the current owners’ father/grandfather, started the development of glassware that was ‘friendly’ to wines. And since then Riedel have been developing stem and other glassware, usually working with producers, focused on delivering the bouquet, taste, texture and finish of wines at their best.

I have to admit to having a healthy degree of scepticism when asked along to a spirit tasting using Riedel stemware. Could the shape of a glass make a difference to different spirits? I wondered. Surely a slug of whisky (or Whiskey) or indeed any other spirit, would smell and taste the same no matter what vessel it was served in. So I arrived at the Vinopolis complex, by London Bridge, for the tasting thinking that this might be a load of bunkum. Could I be wrong?

We were invited to taste three different spirits; a tequila, a single malt whisky, and a cognac, each from four differently designed glasses. Three of the glasses had been designed to give the optimum tasting experience for one of the specific spirits, the other, a classic large brandy snifter, was also included for comparison. We sat at the table and Maximilian Riedel (the 11th generation family member) led us through the tasting. 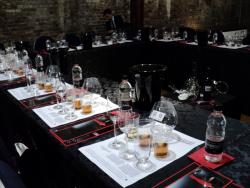 Before us we had three plastic cups each containing one of the three different spirits, together with the three specifically designed glasses and the brandy snifter. Maximilian instructed us to divide the first of the spirits, the tequila, between the tequila, cognac, and single malt whisky glasses, which of course, we did. We were invited to sniff and taste the tequila in each of the glasses and while the smell and taste of tequila came through in each of them, there was a greater depth and rounder aroma from the tequila in the glass specifically designed for the drink. In terms of taste and feel, in its specific glass the tequila was more voluptuous and softer on the palate with richer bigger flavours coming through. We then poured the remainder of the tequila into the brandy snifter, in which it both smelled and tasted much harsher than in any of the other glasses; pure alcohol hit the nose and the palate.

We repeated the exercise with the cognac and the single malt whisky, and in each of these cases the resultant tasting experience was the same, the glass specifically designed for the spirit somehow both enhanced its aroma, the feel on the palate and its depth of flavour. Similarly the brandy snifter had the same effect delivering harsh alcohol on the nose as well as a harsher taste and feel on the palate. I have to admit to being vey surprised how much fuller the aroma, flavour and feel of the spirits were in the glasses developed for them and yes, hands up, I was wrong.

Clearly I need to think about getting some Riedel glasses for my favourite tipple – if only I had one! But if you have a favourite drink and you’d like to savour it at its best, it’s perhaps something you should consider.

You can read about about our experience of Riedel wine glasses in Ellie Knightsbridge’s article, about Maximilian Riedel in Douglas Blyde’s interview and for more information about their range of glassware, visit the Riedel site.