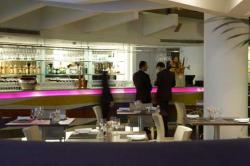 The Commonwealth Club by Trafalgar Square has always exuded an impossibly glamorous mystique. Its parade of international flags brightening the stucco-ed pillars, its jetset moniker and my visions of dallying diplomats, have always made it a bit of an exotic draw. In actual fact, it’s quite accessible – I’ve been to an art exhibition by homeless people in its downstairs gallery and a political lecture somewhere among its labyrinth. Yet despite the restaurant of this private members club opening up to the public a couple of years ago, the club still seems a bit under-appreciated.

Perhaps that’s why, on the first Saturday of every month, its restaurant, the Commonwealth Kitchen, will be hosting music and reader events accompanied by a three-course lunch or dinner designed by head chef Oliver Tobias. The British menu, they say, aims to provide a contemporary Commonwealth and international twist. The Commonwealth Kitchen is managed by Searcy’s, which also operates The St Pancras Champagne Bar, The Portrait Restaurant at the National Portrait Gallery and The Hurlingham Club.

The interior, which is cream and stark, is capacious with high ceilings, a mezzanine floor and a gallery of paintings striping the wall. There was an international palette of diners too when we went, as would suit a Commonwealth Club. And the food was excellent – well, what I tasted anyway. My citrus crab tapioca with brown crab and cucumber toast was inventive and refreshingly subtle. The synesthesia created by casting a crabby fish flavour through what looked like frog spawn was very interesting.

For mains I had pan-fried ling with peas, broad beans and a smoked aubergine chai masala froth – see the international element creeping in? Good piece of fish and a distinct woodburning stove flavour in the sauce. The baked yam with spinach, fennel cream and taro root crisps sounded puritanical on the page but was lovely, the yam gooey and caramelised, made to look sharp by the authoritative fennel cream.

At about 9 o’clock Sam Kelly’s Blues Band began playing in the basement. It’s at this point I hand over to C, my guest, to review the music as he plays in a band himself: ‘The band enthused the diners with an excellent mix of covers and originals, encompassing love and heartbreak and brushes with the law,” he says.

‘There was a hushed atmosphere and the trio’s instruments were played quietly, which allowed the listener to pick out the notes of each. An acoustic guitar, bass and miniature drumkit made up the ensemble. The frontman was the star of the show as he produced some glorious harmonica playing, at times mimicking the notes he was playing on the acoustic guitar. His in-between song patter was fun and brought one or two laughs, especially when he quipped about his long career singing the blues and his failed romances.”

Now, I’m not sure if there were any dallying diplomats in the audience or failed romances but I know at least two satisfied diners.

The music and talks will alternate on a monthly basis. The music evening will start with dinner at 7.00pm and the performance from 9.30pm. The three-course dinner is priced at £25.00 per person. The Readers Luncheon events will take place at midday and include a special three-course menu followed by a thirty-minute presentation.