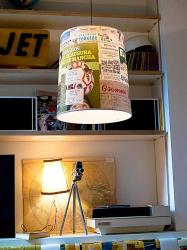 Do today’s youth know what loudspeakers are? They seem to think music emerges only from earphones or mobile phones on buses. The latter is apparently called ‘sodcasting’, as in ‘sod you’, and sociologists claim it to be a marvellous expression of individuality. Of course sociologists don’t travel on suburban buses, forced to listen to violent, misogynistic lyrics whilst trying to read a book.

Flatplanet are definitely loudspeaker likers, they have classic, working, examples dotted around the room and even an essay about them on the menu. It’s funny how the people behind Flatplanet, the same people behind Leon, seem to idealise the 1970s. It’s like sitting in my teenage bedroom without the Yes posters and I’m no longer wearing flares, except to weddings and funerals.

The Flatplanet food idea is simple; various toppings on baked bread. This of course sounds like an idea that’s already been had, one that we food experts call a pizza, but there is a difference.

A flat bread is less yeasty than a pizza base, less chewy and with a cracking crispness. It doesn’t dominate the toppings, it just helps get them up to the mouth without limply surrendering half way and chucking them down your shirt.

In many ways this is how pizzas are supposed to be, or at least before deep crust came along. The breads here are also increasingly made with organic English spelt flour, a boon for the gluten intolerant and with a depth of unique flavour

What really stands out when your breads arrive from the busy open kitchen is vibrant colour, a sense of freshness. Unlike at Leon, where everything seems to be khaki coloured, this food doesn’t look like it’s supposed to be served from a Bedford van by a malodorous hippie . Instead it looks; well it looks healthy in fact.

It is blooming salty though. I can feel cellular walls collapsing as I eat, so it’s handy there are plenty of jugs of tap water on hand. Quite where the salt is coming from is hard to tell, some of it is naturally present, in Parmesan style cheese for example, but I think there’s maybe too much in the bread.

Anyway I like salt, I eat Pringles for fun, so I don’t mind at all tackling our big batch of breads. The El Diablo has a real parade of flavours including chorizo, garlic butter, tomato, coriander and rocket. There’s harissa in there too, apparently, but I’d have liked even more. The Diablo is in the detail.

It’s good though, as is the Wikileeks (groan) with its cooked down leeks, powerful knobs of goat’s cheese and sprinkling of thyme making it a French tart in all but name. Maybe they should have called it the Sarkozy? Chilli jelly on top adds a bit of fire, but could have been dobbed about a bit more randomly instead of being kettled up one end. 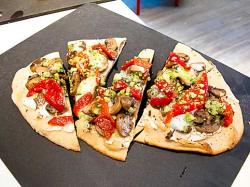 The Moroccan is a cracker of a plate, and thankfully not called L’Etranger. The tabbouleh on it is a burst of herby goodness, and the hummus rich, creamy and well tahini’d. It’s my favourite of all, as the Auberginey is too auberginey for me, being a vegetable I have an on/off relationship with. A mushroom bread with Parmesan turned green with basil, if not envy, is mouth-fillingly good.

A chocolate brownie is gloopily delicious but a hard dish to finish off, a gnat’s hair away from being just pure chocolate and butter. Mind you, for a lot of people that’s no negative.

The location of Flatplanet, at the top end of Carnaby Street, is ideal for this kind of in, eat, out kind of venture and the prices are right for the young crowd it attracts. The side orders of mimsy and old style New Ageism can be put down to the age of the owners, which is unfortunately my age too.

There’s a lot of ‘small plate’ nonsense going around London right now, but Flatplanet is genuine and well intentioned and not simply a leap aboard an already clapped-out bandwagon. It’s not a first-date restaurant, nor somewhere to take your parents for their wedding anniversary, but it’s perfect for lunch, pre-flicks or a just a fast fill up on fresh food with world flavours.