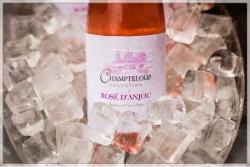 I believe it was the Bard who said: Ã¢â‚¬Å“a rosÃƒÂ© by any other name would taste as sweet…Ã¢â‚¬Â

Ok, well maybe that’s a slight misquote, nevertheless, there is one overlooked link between the works of Shakespeare and those pink wines of summer. Not a case of what is it, but where is it? In fact Anjou in the luminous Loire Valley is home both to one of Shakespeare’s most notorious characters and one of France’s best known rosÃƒÂ©s.

I can’t guarantee that it was with a glass of RosÃƒÂ© d’Anjou that the formidable Margaret d’Anjou, wife of Henry VI and main protagonist in three of Shakespeare’s history plays, toasted the death of her nemesis the Duke of York. But if it had been, I am sure she will not have been disappointed.

The wine in question was once the toast of the Loire and according to my sources made up 55% of local production at the end of the 1980s. However, the style of sweeter wine they were making at the time found itself, alongside shoulder pads and nouvelle cuisine, going out of fashion in the 1990s.

Evidently, the people of Anjou are making an attempt to win back their reputation for good quality rosÃƒÂ©. Because, at a little symposium organised by Douglas Blyde on the roof of a London pub a few weeks ago, the modern RosÃƒÂ© d’Anjou I tasted bore no resemblance to that stuff of our collective 80s nightmare.

All of the six wines served were dry or slightly off-dry; the ideal drop to enjoy in the garden on a sunny Saturday evening. And while these are definitely wines to savour while they are in the first flush of youth, they also make a good option to accompany some of the classic dishes of the Loire Ã¢â‚¬â€œ freshwater fish from the river, rillettes and rillons, and fruit de mer from the coast around Nantes.

This got me thinking: what would be the perfect dish to honour the wines of Anjou, the terroir of the Loire and Margaret d’Anjou herself? It was then that I had my eureka moment, as a French phrase popped into my head Ã¢â‚¬â€œ il y a anguille sous roche. Loosely translated as Ã¢â‚¬Å“there’s an eel under the rockÃ¢â‚¬Â, it is the French version of Ã¢â‚¬Å“cripes, there’s something fishy going onÃ¢â‚¬Â.

Not only is this quite an apt phrase with crafty old Margaret in mind, eels are also a classic part of the cuisine of Loire, so make a natural bedfellow for the rosÃƒÂ© wines of Anjou. Usually stewed in red wine, my own recipe (which is also a tribute to James Hamilton-Paterson’s classic book Cooking with Fernet Branca) turns them into tasty little hors d’oeuvres, with the eels hiding themselves from the diner under a savoury little rock bun (hence the name!). They would be perfect to have on the terrace before dinner: glass of vino in one hand, anguille sous roche in the other.

1 eel from the Loire, skinned and cut into 5cm chunks

A splash of milk, plus more to glaze

This recipe really falls into two distinct sections, which can be spaced apart by up to a day if you like. The first job is to poach the eel in a court bouillon, which is as easy as kiss my hand. Simply combine the wine, bouquet-garni, onion, carrot and peppercorns in a large pot and bring to a gentle simmer. Turn down the heat, add the pieces of eel, cover and leave to cook gently for ten to fifteen minutes, or until the eel is cooked through. Take the pot off the heat and leave the eel to cool in the liquid, before removing and flaking gently.

When you are ready to proceed with the second half of the recipe, rub the butter into the flour until it resembles breadcrumbs. Add the flaked eel, before crumbling in the cheese and season with a small amount of salt and plenty of pepper. Then, make a well in the centre of the dry ingredients and add the egg and that splash of milk. Stir gently to combine the ingredients into a workable dough, adding more milk if it is too dry. Then divide into little bitesize morsels Ã¢â‚¬â€œ using two teaspoons is a good method Ã¢â‚¬â€œ and place onto a baking tray. Brush with a little milk to glaze and then bake in the oven at 180 Celsius for 15 minutes, or until golden brown and cooked through.

Leave to cool slightly before serving with a glass of, you guessed it, RosÃƒÂ© d’Anjou.