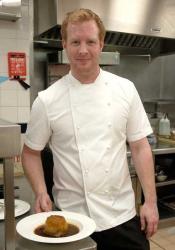 I’m gazing at the menu at The Savoy Grill and it all looks rather good value; nothing on the starters is over 90p and most are around 30p. The mains aren’t too steep either with an average dish like a Tournedos Rossini coming in at a reasonable £2.75.

Andy Cook, Head Chef at the Savoy Grill agrees the prices don’t look that bad. ‘Mind you,’ he points out, ‘back then in 1975 petrol was 28p a gallon.’

We’re in the Chef’s Table room in the Savoy Grill’s kitchen where affluent diners can eat in luxury surroundings while watching a top kitchen in action through plate glass. If you want you can even join in and cook with the team, an options that has proved to be very popular indeed. Andy has spread a selection of old Savoy Grill menus on the chef’s table, some going back to the 1890s, to explain the menu philosophy of the Savoy Grill in 2011. 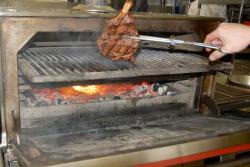 ‘We wanted to put the grill back in The Savoy Grill,’ he explains. ‘In the 60s it had almost become a canteen, the menus were bigger than a Chinese restaurant’s, the room was twice the size and the kitchen was downstairs. Then later it became all fine dining with canapés and all that. And then if you look at the 2002 menus they had things like tomato and goats cheese tart on!’ He shakes his head ruefully.

Putting the grill back into the Grill meant a tighter more focused menu and splashing out on a Josper Grill for the kitchen. These devices, now over 40 years old in design, are being seen more and more in the kitchens that can afford the £8k or so that they cost. They’re basically sealed barbeques burning charcoal and, thanks to the door, they retain moisture around the meats being grilled and add a unique flavour.

And because they are so incredibly hot, they seal the meat perfectly whilst keeping the centre pink. When the door is opened the heat is so intense you can feel the hairs on your arms crackling and you back off instinctively. As Andy says, ‘the heat means you can cook meat so much quicker, a perfect 16oz rib eye in about five minutes. It also means you can burn it to a crisp too if you don’t keep your eye on things.’ 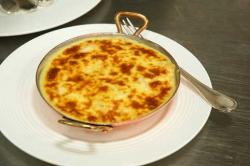 It’s only 11 am but the heat in the kitchen is already intense despite it being a very modern and well-ventilated set up in most ways. The big old battleship of a range, twenty-five years old but so classic and so expensive it survived the refit, is shimmering with heat waves and all around the room the stovetops are pumping ready for service. Andy grabs a copper frying pan and makes a quick classic of The Savoy Grill, the omelette Arnold Bennett as made for the great man back in the 1920s

Basically an omelette with cheese, hollandaise/béchamel sauce and flaked smoked haddock it’s deceptively simple, or at least Andy makes it look so. ‘I don’t normally do any cooking myself,’ he says over his shoulder, ‘I ‘direct’ the cooking!’ Even so he seems to have forgotten none of the skills that got him to the top and within minutes a beautiful omelette is served up on the pass. It really is one of the nicest things I’ve eaten for weeks and I’d have finished the whole thing if I hadn’t been mindful that Andy was now quickly cooking a snail dish. 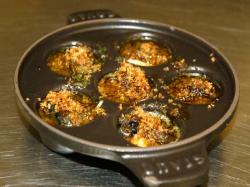 ‘Herefordshire snails,’ he says holding out a bowlful of fat black curls, ‘they come cleaned and out of their shells direct from the grower.’ Helix Aspersa Maxima to give them their proper name are farmed in Credenhill then washed and blanched in boiling water before being sent out to demanding chefs like Andy all over the UK. ‘It’s a dish we created for the opening,’ explains Andy, sizzling snails furiously before setting each on a bed of parsnip puree and dressing them with a red wine jus ‘to add a little more richness and make it lovely and gooey and delicious.’ And as we spoon it into our mouths, it certainly is.

‘Steamed steak and onion pudding with onion sauce,’ announces Andy as he carries over another dish for us to sample. ‘A classic dish that you don’t want to mess around with too much.’ And it’s a proper version, it’s pudding not a pie so you get the beautiful suet with its semi-crusted surface and rich centre absorbing all the juice. The steak is perfectly tender, the jus delightful but I miss the kidney part myself. Even so it’s a great British dish done right. 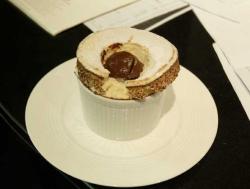 The menu is full of such treats as Andy ticks them off: ‘Herdwick mutton, carrot and turnip pie with Worcestershire sauce, Butter-poached and roasted red-leg partridge with a partridge turnover and smoked bacon sauce and Braised English hare with roasted saddle and buttered spätzle,’ are some he lists, ‘and each weekday a special, today’s is roasted rack of Dingley Dell pork and tomorrow we have roasted beef Wellington.’

It’s just the sort of thing the Savoy Grill should be serving and as Andy goes to rustle up what turns out to be a divine Passion fruit soufflé with chocolate sorbet, you can’t help but wonder how the Savoy Grill let itself lose its way before. A bastion of Britishness it now has the focus right, a bit of clever cooking, a bit of classic French but above all it’s the Grill as it should be, firing on all cylinders and showing how the British do things.