Big in France and Italy so I’m told, Scholtes is launching its high end appliances into the UK market and not without considerable flair. Not only did they commission a play for their campaign, they also invited us along to their The Centre of Excellence in Oxford Circus for a breakfast whipped up by the Michelin Star chef Sat Bains. He is just one of the celebrated chefs Scholtes has in their team of ambassadors who will be leading sessions on everything from slow cooking to forging during the opening weeks. 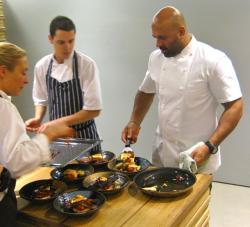 After we milled around lifting lids that revealed hidden deep fryers and steam baths and sipping coffee brewed from hole-in-the-wall Scholtes coffee machines, we headed downstairs for a hearty morning meal. The lower demonstration room has a deceptively large kitchen where Sat Bain and his colleages will be cooking up feasts for visitiing guests of Scholtes and passing on their culinary wisdom. 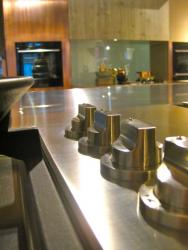 ions. It is filled with modular tables that can apparently be pulled apart and rearranged in any manner to suit any request.

Today it was assembled in one long table. The coffee only held us off for so long, we were getting hungry and the smell of frying bacon and chorizo was becoming torturous. Sat Bain dwarfed the bench as he moved around the space with relative ease. He complained that he could not get the bacon he wanted but I got the feeling it wasn’t going to matter too much.

I was right. The breakfast was a fry up of epic proportions. On a toasted piece of crusty Italian bread was piled a fried egg, bacon, roasted tomato and a chorizo and egg concoction that I ate before I could figure out exactly what it was. It was a casual meal, with some ketchup on the table and some friendly banter as the chefs continued to prepare for the next function.

Back up stairs I gave the appliances a closer look. One could be forgiven for forgetting the reason for our visit, after eating that fancy fry-up. I found out that Scholtes was the first company to introduce the self-cleaning pyrolitic oven, and the first ones to launch the ceramic hob. They even invented the cold-touch oven door. Pretty impressive stuff. Looking at the appliances you can see their appeal. Almost commercial in their simple, stainless steel aesthetic, I dare say they perform with commercial precision.

With a launch campaign brimming with enthusiasm and individuality, it seems Scholtes is serious about becoming synonymous with innovation in the eyes of their UK clientele. Not content with being the brand of choice in the homes of many Europeans, Scholtes looks set to makes itself at home in the kitchens of the UK as well.