Despite one in five British adults claiming to start planning for Christmas from today (25 October), research commissioned by Taste of Christmas reveals that a third of the nation still has no idea how to cook a traditional turkey dinner.

Baffled with even the basics, the poll of over 2,000 adults also found that 26 per cent of people admit to relying on their mothers culinary skills, calling them directly for advice compared to only 3 per cent who would rely on the internet. Meanwhile, one in six men agreed that they would only trust their mother to make the best stuffing on Christmas Day.

For those tasked with hosting duties over Christmas a remarkable 20 per cent of women struggle to sleep each Christmas Eve, with the worry and pressure of cooking and entertaining for family and friends. Unsurprising then that one in ten people will give up entirely and choose to eat out this Christmas day.

With certain Christmas traditions taking a back seat, it seems some tastes never change as one in five people would happily ban the staple Brussels sprout from the dinner table completely, citing it as their least favourite part of the meal.

One piece of good news is that 30 per cent of Brits are planning to buy local produce this Christmas, giving a boost to local communities. One in ten people will even spend as much as £200 on Christmas dinner, while one in eight will go over the top by catering for their pet, cooking a special meal to enjoy with the rest of the family. 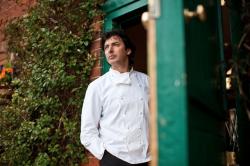 Although not surprised by the findings, well known chef, Jean-Christophe Novelli, is undeterred in his mission to encourage people into the kitchen. ‘It’s great to see our appetites for food and drink based TV programmes, magazines and blogs grow and grow but what’s actually happening in our kitchens? We are tuning in but turning off and the pressures around Christmas won’t help encourage people to have a go at showcasing what they know they can do. With two months to prepare, my advice for those who are unsure how to cook a Christmas dinner is to choose a dish and practice practice practice. You have two months to perfect it and what a great gift for somebody special!’

Novelli will be joining Jamie Oliver, Hugh Fearnley-Whittingstall, Gary Rhodes and Michel Roux Jr (to name just a few) at this year’s Taste of Christmas taking place between 2nd and 4th December at ExCeL in London www.tasteofchristmas.com