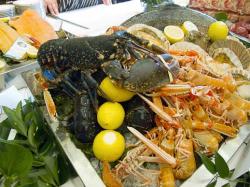 The salmon hooked me, a reversal of the way things usually go. The great sides of Summer Isles smoked fish were sliced thickly on the spot and anointed with the barest drop of lemon, no brown bread and butter thank you, and tasted delicious. The merest hint of smoke coming through from the rich, buttery, flesh as well as hint of sweetness from their special brine. You couldn’t compare it with supermarket smoked salmon; it was a different kettle of fish entirely.

Summer Isles were just one of around ten Scottish producers who had lugged their lovely grub from the Highlands all the way down to the lowlands of the RAC Club in Pall Mall. The intention was to show first hand what we miss out on when we fix our foodie gaze on Ludlow or the continent. The Scottish Highlands are a land rich in fine produce, none of which need to consume air miles to get to our plates.

Achiltbuie kipper pate with seaweed relish on oaties and cones of native lobster were passed around and gobbled up. Venison carpaccio wrapped around Highland Blue cheese was burst in the mouth flavour. The RAC Executive Chef Philip Corrick had cooked all the small plates and if you wanted any reason at all to join then to be able to eat his food every day would be a compelling one. 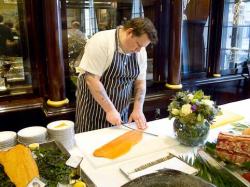 If you’re in the market for a whole mutton carcass, which probably means restaurants only unless you’ve got a big freezer, then North Ronaldsay Mutton is your man. The sheep roam wild on the Atlantic shoreline and graze on seaweed. Braised and served with pearl barley it was a revelation, none of the often unpleasant ‘gameyness’ of mutton, the meat was sweet.

Sweet too was the scallop from Keltic Seafare, hand-dived of course to spare the seabed damage and brilliant were their creel caught langoustine and lobsters, the former robed in batter and deep fried and the latter served in a creamy mayonnaise. All Keltic products have full traceability, something the better restaurants are justifiably keen on with their suppliers and the shellfish reach London 16 hours after being plucked from the sea.

The big boy on the day was the enormous roast rib of beef from Mey Selections. Danny Miller is a 6th generation Caithness beef and sheep farmer was on hand to sing the praises of his cows but there really was no need. The beef was cooked perfectly rare and when thinly sliced and put in a mini ciabatta with a watercress sauce made a sandwich made in heaven. Much of Mey Selections beef is available in selected Sainsbury as well as independent retailers. 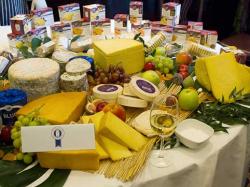 A Cloutie dumpling with Drambuie custard went down well, as did the Glenmorangie whisky pannacotta shots. And of course Glenmorangie were on hand to let us sample their Bourbon ten-year cask-aged standard whisky, as well as their 18-year-old malt, both something to fortify us before braving the icy winds down Pall Mall again. The whisky was served alongside some of the remarkably good cheeses being sold by Connage HIghland Dairy as well as Highland Fine Cheeses, the latter’s Blue being a real French beater and uniquely made with milk from farms across Caithness.

The Scottish invasion was designed to conquer our prejudices and defeat us with the mighty power of fine produce. It succeeded. If Scotland ever gains independence, let’s hope they don’t decide to starve England into submission.