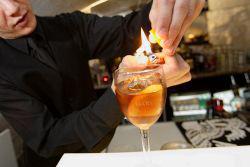 Dutch the on-board bar manager sets my flambé sherry cocktail alight as a cannon explodes into the cold air to announce the start of the voyage. I am on board the Matthew, an exquisite, full-size replica of the historic ship originally sailed by John Cabot in 1497 from Bristol to North America.

Our trip is rather less ambitious; we are to sail only a couple of hundred metres between Bristol’s Arnolfini and The Watershed, a pair of much loved city arts centres. Beside me on deck are the mayor and sheriff of Bristol, the latter dressed flamboyantly in a frilly sleeved shirt and knee-high boots. I give a royal wave for them both to an eager audience lining the shore as a footbridge is raised for our passage.

‘I love this boat and am so proud of its history’, Caption Rob Salvage tells the passengers made up of journalists, local dignitaries and members of the Harveys’ family – them of sherry fame, who have played such a key role in Bristol’s rich history. We are en route to attend the much-anticipated launch of the new Harveys Cellars.

12 Denmark Street has been the original home of world famous sherry since it was first imported to the city in 1796 from across Europe. Once the site of one of Bristol’s most iconic restaurants, Harveys Cellars designed by Sir Terrence Conran, it is steeped in the history as the birthplace of Harveys Bristol Cream, known as the world’s first cream sherry. 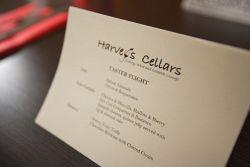 The disembarking passengers make the short walk along central Bristol’s cobbled streets accompanied by two enormous sherry barrels that are being rolled up to the door of Harveys Cellars for atmospheric effect. Inside, a member of the Harveys family cuts a red ribbon draped over a wall decorated with Bristol Blue Glass and speaks with emotion about how thrilled he is to see Harveys Cellars open again after being closed since 2003.

Once again, Dutch is on hand to share his seemingly encyclopedic, yet never dry, knowledge of fine sherry and cocktails. Surrounded by Harveys memorabilia which form a small museum, we are told that behind the bar a network of tunnels running all the way to the dockside were once used to transport sherry barrels to the docks and back.

For those unsure of which sherry to choose, I highly recommend a Harveys Cellars Sherry Flight with tapas as an enjoyable introduction to the wonderful possibilities of this much-maligned drink. An aperitif of Harveys Bristol Cream Signature Serve is followed by a chilled crisp Fino and accompanied by roasted almonds and marinated olives. A glass of warming, Fine Old Oloroso is perfectly matched with flavour-rich Spanish cheeses and quince jelly on fig and almond cake. 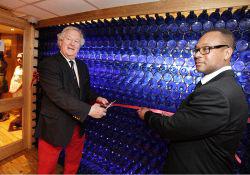 My favourite combo had to be the figgy, almost jam like Pedro Ximénez and fruit trifle. Although delicious as dessert drink, I decanted my glass full over my trifle, which worked so well everyone on my table followed suit. As I vowed to buy a bottle, Shelley, my pretty, twenty-something dining companion and a surprise sherry aficionado told me that Pedro Ximénez is usually referred to as its common shorthand of ‘PX’.

It seemed only right to toast this momentous occasion with one – or two – of the fine sherry cocktails from Harveys Cellars’ extensive drinks menu. A couple of our party went for a New Yorker Martini of Fino, Bols Genever, Noilly Pratt & Cointreau shaken over ice & served straight up – a fine and imaginative interpretation of the cocktail classic. I plumped for the prettily and aptly named Daisy’s Dream, a lovely frothy, ladylike mix of Harvey’s Bristol Cream, Martin Millers, lemon, egg white, rhubarb bitters & Fraise de Bois.

www.harveyhalfhour.co.uk includes a thorough description of the varieties of Harveys sherries and Harveys historical background