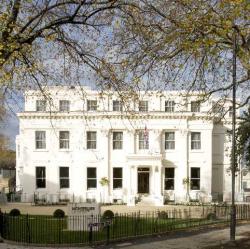 ‘Don’t be put off by the chicken stock,” says Simon Hopkinson, expressing his take on vegetarian cooking. ‘It’s more about cooking without meat, fish or poultry.” This pleasure over purism approach offers a fractal perspective suited to someone who looks for the overarching story in food.

And that makes Hopkinson, doyen of the cheffing world and writer of cookery books – including the best-selling Roast Chicken and Other Stories – more than suitable for his new role as consultant across Chapter hotels.

Hopkinson, founder and co-owner of Bibendum restaurant in London, is currently supporting head chef Tom Rains at the 74-cover Montpellier Chapter Restaurant in Cheltenham which showcases ‘simple, seasonal and classic British dishes”. It’s a good time for Hopkinson, with a forthcoming BBC TV cookery series and accompanying book. However, he later tells me he’s not a fan of public speaking although the BBC made it all very pleasant for him. 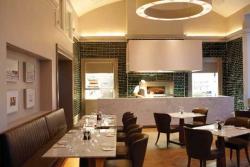 We’re here to taste the cooking of Rains who works under Hopkinson’s guidance. Rains says the two get together and brainstorm frequently, swapping books and recipes but all with the aim of producing ‘straightforward cooking, done well”. Rains, from Cheltenham, has worked at L’Escargot, the Berkeley and Claridges, among others. But he says he and his wife jumped at the chance to move back to Cheltenham, where his family are, when The Montpellier Chapter opened in November last year.

Now he’s done all the fancy cooking, he says, it’s back to basics. We ate off the a la carte menu – reasonably-priced and bistro in its bias. I started with the fresh crab with mayonnaise, lemon and grilled bruschetta (£12.50). The crab was fresh and jiggy, separated into piles of creamy white flesh and the brown paste – very nice with the lemon slicing the emulsion of mayonnaise. Pork fillet wrapped in Trealy farm ham, honey glazed belly and crackling (£18.50) is one of Rains’ signature dishes. It was very good, the three porks distinct from each other – a cube of taut, sweet belly, some gentle roundels of loin and a raucous smashing of crackling on a cute thumb of mash.

For pudding, I ventured the nougat parfait as it’s not that common a dessert staple in this country. It was a little confused in its flavour. I’m told Rains, ever the perfectionist, is now planning to change it to the safer mango and passionfruit cheesecake. 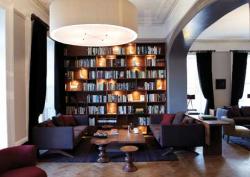 While the food is classic, the hotel prides itself on its technological advancement. The wine list is on an iPad while the information in the hotel rooms is on an iPod – we had great, late night fun playing its choice of music. There’s also some very interesting artwork on the walls curated/produced by Central St Martin’s art college – more quirky and disturbing than you’d expect from an establishment five minutes away from the elegant Cheltenham Ladies College.

And it’s an intriguing building. Grade II listed, it’s retained its original early Victorian magnificence, including an elegant conservatory, all window-paned geometrical suntrap. But it also has a dead modern crescent-shaped wing as well as an inner courtyard surrounded by panes of red glass where people seemed to be having a sneaky fag or two. My favourite bit was the curated library where shelves of beautifully-kept hardbacks add decoration – books as art objects! A refreshing foil to the hotel’s technological flair and another argument against ugly e-book readers.

Anyway, I digress. The Cheltenham Food and Drink Festival is coming up between 17 and 19 June when Rains will be demonstrating. And you could do worse than pop in to the restaurant here – it’s keen, it’s simple, well done and unpretentious. It may be quite a safe menu, but I imagine the Montpellier demographic likes it that way. And remember to take a peek at the library. Sometimes, many times, old-fashioned is so much more to the point.

Rooms start at £140 per room per night inclusive of VAT