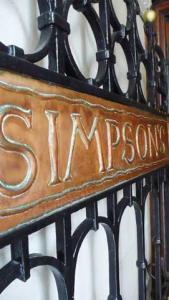 I twirled through Europe’s second-ever revolving door into dapper institution, ‘Simpson’s In The Strand’. Established in 1828 on the site of the Fountain Inn – home to literary association, the ‘Kit Kat Club’ – its chequerboard floors, tiles and knight motifs nod to a past when patrons could enjoy coffee, cigars and rapt games of chess in tall, discreet booths for just nine pence a day.

Mirroring the layout of the ‘Grand Divan’ below is the Regency Room, where I was seated amongst London’s top sommeliers. With daffodil-coloured walls, chandeliers festooned with crystal leaves and icing-like plaster fringing painted clouds, it previously served as the Ladies’ Drawing Room until genders were mingled in 1984.

Whilst our own ‘duty’ was painless, it still required focus: to establish which expressions of cognac from artisan house, ‘Audry’ best complemented Simpson’s autumn dishes.

Described by Time Magazine as ‘the best cognac you have never heard of’, Audry was founded in 1878 by Aristide Boisson, great, great, grandfather of current owner Bernard. Although Bernard has spent most of his life in law, briefly taking over as distiller when his brother died in the ’60’s, he has still found time to introduce the family spirit to every three Michelin-starred restaurant in France and Switzerland. Describing himself as ‘a very active pensioner’, Bernard is determined to raise Audry’s profile amongst British connoisseurs – as this latest day trip to London confirmed. So far, Nobu and Simpson’s are his most notable ambassadors.Amidst a trio of polished, mobile cloches originally intended to glide joints to table to avoid disturbing chess players, we were served two main courses by waiters in white gloves. Honouring early manager, Thomas Davey, who insisted on eschewing French terminology, Simpson’s ‘bill of fare’ (rather than ‘menu’) is written in English and prepped by ‘cooks’ (rather than ‘chefs’). 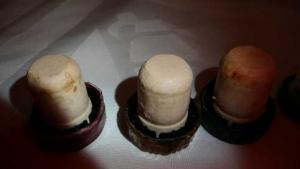 Legs splayed, a deftly roasted quail perched plumply on discreetly flavoured truffle mash with lustrous racing green spinach and intoxicating port sauce. From a portfolio of balanced, or ‘well-melted’ XO, which had nuances of tangerine oil; feistier, sharper XO Special Reserve; complex, tobacco and ‘rancio’ (posh, seasoned wood) scented, iron fist in a velvet glove Memorial; lifted Exception and the bracing but moreish single cask, cask strength, Très Ancienne, there ensued heated debate as to the best marriage with the dish. Whilst it took time to adjust to savouring savoury food alongside minimum 40 degrees of alcohol, I thought that the supple, sweetest, creamiest, cheapest (£69) XO added texture to the subtly smoky meat, whilst cutting through the aromatic mash and cleansing the heady sauce. Others preferred the XO Special Reserve (£74.75) for its directness and notes of tea leaf and toast.

The second course was even more of a triumph: fleetingly pan-fried venison berthed on a custard-like, silky parsnip mousse tart of exceptionally fine, pepper-pricked pastry (which dissolved in the mouth), braised shallots, tiny but pouting button mushrooms and game glaze. Parsnip being an enemy of most wine for its brisk acidity, all expressions fought through, although the remarkably smooth, amber-coloured Exception (£201.25) worked best, leaving a feint, dried pecan aftertaste long after the final mouthful.

To finish, chocolate fondant proved an Etna of molten cocoa and butter, cooled by vanilla ice cream. Dealing with such sticky, decadent richness, at 50%, the rare Ancienne subtly cleansed the palate – not bad going for a 40 plus year-old rarity valued at over £300 a bottle. 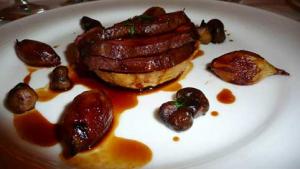 After lunch, I begged a tour of the most recent addition to Simpson’s, the art deco Knight’s Bar built in 1999, where I suddenly felt very young under the glare of its regulars, then the basement smoking room, changed little since doors first opened. Amusingly, and practically, this incorporates a now sadly blocked trough flanking the bar – an emergency measure for gents in need of fast relief. Manager, Stephen Busby (formerly of ‘Christopher’s’ at The Thistle, Victoria, whose bugbear there were the filthy but un-cleanable, bombproof windows) showed me intriguing memorabilia. This included architects’ plans for bedrooms which were never built and a menu dating from the second world war. Respecting rationing, it stipulated that Divan diners could not have ‘any more than three courses in a sitting’. There would also be ‘one meat-free day a week’ amongst ‘five potato-free days’. Good to see standards upheld.

Audry’s avoid shortcuts like charred chip teabags with colour and sweetness coming from barrels, rather than caramel, and a product slowly matured and harmonised before being bottled in refreshingly traditional bottles. So the not inconsiderable prices requested for these outstanding cognacs didn’t seem outlandish in context.

It had been a provocative and testing lunch. Overall, in contrast to wine, which normally tames the food, Simpson’s gutsy, but leavened menu appeared to have disciplined the drink…

[Bottles are 70cl; prices are retail]

For more information and to order, visit www.bibendum-wine.co.uk