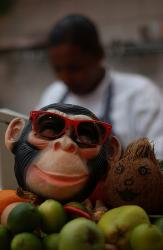 We’re all going a bit bonkers for street food right now, but what about roof food? Nick Harman thinks he may be in on the ground floor of a brand new trend.

The wind buffets SkyMarket, five floors up over Tooley Street, and a large red chili tumbles off its shelf and rolls over to lie beside a fast growing puddle on the deck. The rain lashes down, occasionally finding its way in, and the sky fades to deepest black. In a few hours SkyMarket will open for the evening’s business and the chefs are prepping hard, oblivious to the wind and rain outside and positively basking in the warmth of the cooking range and the heat lamps. 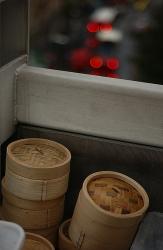 A small lift at the base of Magdalen House brings you up to Skyroom, an award-winning roof construction created by David Konn. It looks jerry-built but is in fact sturdy and secure and it’s a kitchen, bar, deli, art and craft gallery and performance space all on one rooftop.

Julian Bayuni is one of the creators of Platterform the company behind SkyMarket, along with Kevin Darcy. Originally both mixologists at Momo where they first met, Julian went on to manage West London’s Notting Hill Arts Club and worked in the Netherlands with The Fabulous Shaker Boys. Together they’ve  created plenty of cool pop ups and  Platterform itself picked up a Young British Foodies’Best Food Experience’ award earlier this year. 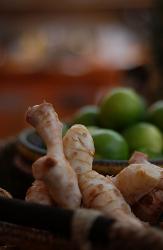 Ã¢â‚¬ËœPlatterform suggests what we do as a brand and events company –  large plates of food and a platform for  ideas, bringing together creative energy,  chefs, mixologists, artists, musicians and  performers,’ Julian explains.’Two years we worked a pop up at Hel Yes! during the 2010 London Design Week just off the City Road and that gave us our initial impetus. I’m used to working in the food world, but this is about more creative ideas and techniques for food and drinks. We want it to be fun and accessible and not intimidate people, but we want to challenge the traditional constructs of what people expect from a drinking or dining experience.’ 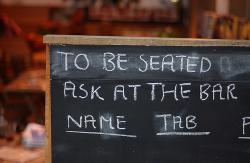 It certainly does that. When you walk out the lift and feel the wind gust you’re already a bit on the back foot but then a vibe familiar to anyone that’s ever been to Camden Market, or a traveller encampment, embraces you. It’s multisensory with four different musical sounds going on around and a wealth of aromas, some from the satay bar perched dizzyingly out over the drop and some from the range where the main dishes are being cooked.

It’s a local, family thing. Julian, who is half Indonesian and from a restaurant running family, even has his stepfather cooking some days, while meat and vegetables come from local suppliers like Maltby Street along with ethical foods such as jams being made in people’s kitchens from fruit that would otherwise go to waste. In season vegetables also come from the nearby St Mungo’s of Melior Street project and the market up here sells a mix of exciting spices and other stuff you won’t find in Tesco’s.’ 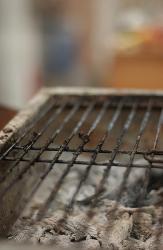 Ã¢â‚¬ËœWe have six chefs in the team, two are Jamie Oliver trained at 15 and are doing a contemporary take on African and Caribbean dishes,’ Julian says as tables are set up.’The dishes are added to each week and they really suit the environment; we can’t seriously expect people to sit down for five courses on a rooftop so we keep a casual street food/tapas thing going along with the market vibe. This week has been Indonesian and Caribbean, next week we’ll be adding some Brazilian dishes. And our SkyMarket Bar takes inspiration from the changing food menu with the bartenders creating bespoke cocktails designed to complement the dishes.’

Nuno Mendes of Viajante is a friend they hope will get involved via his Loft Project, and Gok Wan’s been in a few times too.’He’s a family guy,’ laughs Justin.’He loves this place because it’s a family unit, my mum’s British, my dad’s Indonesian so I think Gok sees the similarities to his own life.  He even got my mum into hotel GB for lunch with Gordon!’

Evolving, and almost literally moving, all the time SkyMarket is a concept they hope to take to other spaces like railway arches. And more rooftops?’We’re certainly looking around,’ says Justin as I start to make my way down.

Experiential drinks brand events including workshops and masterclasses will take place every Tuesday evening at 6.30pm