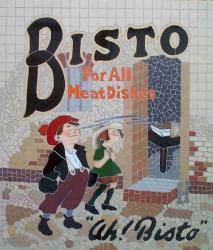 What happened to food aromas? Not the ones they talk about in those TV commercials badly dubbed from the original German, the ones where a blonde yumzy mumzy stalks her family with an aerosol, spraying furniture, teen trainers and pets alike to ‘remove lingering odours.

No I mean the smells that used to greet you when you walked into a restaurant, the ones that got your tummy rumbling and the gastric juices going. These days walk into any top level London restaurant with your eyes closed and you might well think you were in an office block or a dry cleaners.

Of course the powerful extraction hoods in the kitchen are partly to blame. They suck so hard that chefs’ aprons flap up like chorus girls’ skirts every time they walk past, and while extractors may make the kitchen a bearable work place they kill the atmosphere in the main room.

Supermarkets employ a system that sends the bakery smells down pipes to appear at the front door, thus luring in the punters. Well the better ones do anyway, the pile ’em high sell em cheap’ places don’t bother with such psi-warfare, the prices do the luring for them. They could perhaps pump the smell of cheap vodka though, that seems the most popular choice amongst their clientele.

Why don’t restaurants do something similar? A vent over the front door wafting garlic out into the street would surely get diners queuing up in no time; their noses up in the air like the Bisto Kids.

The terrible thing is that even if they did, the dishes served inside all too often have no aroma anyway. The times I’ve painfully bent down until my nose was buried in the plate to try and detect some olfactory clue are legion. Yes I am the man over at the corner table apparently about to snort his meal like a gastro Keith Richards.

Heston Blumentahl famously employed a perfume atomiser to spray fish and chip shop smells around the diner in order to enhance the pleasure of the food. The vinegar from the pickled onion jar was apparently the key ingredient. Not a bad idea, but surely it would be better to simply make the food smell enticing in the first place?

No such problems at Galvin Bistro in Marylebone. There the smell of great food hits you straightaway. So much so you can’t wait to get to the table and get stuck in. Maybe that’s why we are being besieged by so many new Bistros this year; they aren’t gastro temples of tat, they’re places that you go to eat in again and again where food is fun and part of a social experience.

It’s time to celebrate smell again and give the elbow to sterile plates of food fit to be nothing more than pictures on a wall. Wake up and smell the garlic!