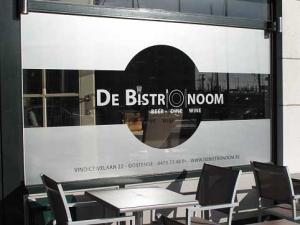 There are no fat people on the Flanders coast. Everyone young and old is whippet-thin, tooling along on their ‘nurses’ bikes that need nothing more than an occasional hearty push on the pedals to maintain velocity on these pancake flat roads.

It must be their diet. I’ve never seen so much fantastic fish for sale; it’s heaped up high in the fishmongers – stacks of sea bass, piles of plaice, masses of monkfish, all with the bright accusing eyes and red gills that testify to their being just hours out of the sea.

And then there are the brown shrimps. The locals love these little delicacies caught by boats that trawl the sandy sea bottom just off the coast using a method that has changed little in centuries. In fact some people still fish for shrimps by riding horses along the beach at low tide, dragging wooden boards across the sand to churn up the shrimps into waiting nets.Mostly though it’s the boats that bring back the briny bounty, leaving harbour at 6pm and returning at 6am, boiling the shrimps in seawater on the way back to port in the traditional way, so that their flavour is preserved and enhanced. Once you’ve eaten these, as one chef later tells me, you don’t want to ever eat them from anywhere else. 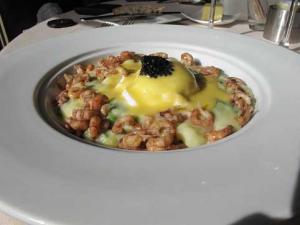 I’m on a bike today too; weaving erratically along behind Christophe, co chef and owner, with his wife Stefanie, of Bistronoom located on the Ostend harbour side. We’ve picked up our bikes from Ostend station, where they’re freely available to all and sundry, and now we’re on our way to the fish market to buy what he needs to make our lunch. The sky is a stunning blue and the wind off the North Sea is bitter and cuts to the quick, but it makes you feel alive and very hungry.

Christophe normally goes to the fish market at 7:30 each morning; no self-respecting chef in Ostend could afford to do any less with such demanding customers. As he points out, Ostend people will spot a less than perfectly fresh fish on their plate in seconds and you’ll probably go out of business soon 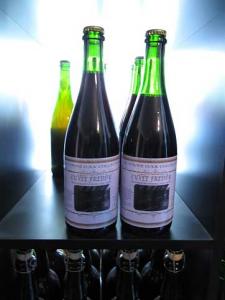 after. After some Flemish banter we buy a big bag of shrimps to take back to his restaurant where Christophe’s wife will be cooking Smeus a local classic dish. ‘You buy the shrimps today you have to eat them today!’ say Christophe, steering insouciantly with one hand, the bag of shrimps dangling from his other.

First however a detour to the local Ostend beer shop. Bistronoom itself stocks over 300 Flemish bottled beers and Christophe even makes his own by renting time in a local micro brewery – micro breweries are springing up all over Belgium, each doing something a little bit different and special. His friend’s new store in town, still surreally looking like the toyshop it was only weeks ago, is the place to quickly try some beer.

This takes a little longer than expected as more and more bottles are produced to be sampled. There’s no spitting it out here, even if it is only 10 a.m. Given the potency of the beers this does make further cycling a bit tricky, but we weave our way back cheerfully enough with my bag now being used as a booze mule for the new brews we’ve bought. This means have to lean over at a pronounced angle to counterbalance the weight. At least it feels like I’m leaning over, that beer was really very strong. 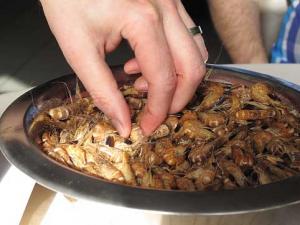 Fifteen minutes later, sitting in the restaurant bay window as the sun pours in, we laboriously peel the fiddly shrimps; they are apparently easier to peel in the morning than in the afternoon as the shells crack away easier – again it’s freshness measured in hours, not days. You get, explains Christophe, about 300g of peeled shrimp from a kilo of unpeeled and you need about 150g per person. The shrimps cost E10 a kilo so it’s pretty much £5 a serving, but they are worth it. Christophe is sharp on the costs of running a restaurant, he’s no beginner and has worked in some of the very top restaurants on the coast, as has Stefanie, and they take it in turns to cook in their neat and charming restaurant.

Today is her turn and she is making the Smeus for us. This simple dish of mashed potato, butter, shrimps and poached egg was staple homecoming food for fishermen and now along the Flanders coast it is often reinvented in various ways, from basic grub to Michelin Star finery. Stefanie likes to create it the way their old mentor Pierre Wijnants did it, with his blessing, and so his name accompanies it on rhe menu. 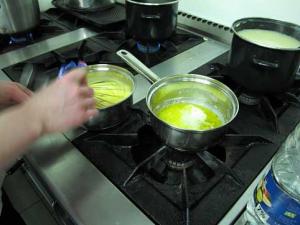 I watch her work in their small kitchen: local floury potatoes are cooked to tenderness and carefully dried. These are then mashed and speedily hand whisked, with a clatterinng energy that sounds like an approaching steam train, with buttermilk ‘to balance the butter fat’ , spring onions,nutmeg and plenty of rich creamy butter and it’s all topped off with a spoonful of caviar ,a perfectly poached egg and loads and loads of freshly peeled shrimps. It’s divine, especially washed down with Christophe’s excellent beer that is secondary fermented with champagne yeast and which contains a hop flower that he has to fish out with a long crab hook and with much under the breath Flemish swearing as it falls repeatedly back in.

You can feel your heart having to pick up steam to handle the closing arteries as you eat smeus. This is not a dish for deskbound workers but for men who’ve spent a day at sea burning calories and getting horribly wet and frozen. The butterered potatoes are as rich and glorious as Joel Robuchon’s famous mash, but stirring in the poached egg makes them even better. And then of course there are the shrimps themselves; ocean fresh, juicy, sweet, briny and delicious. 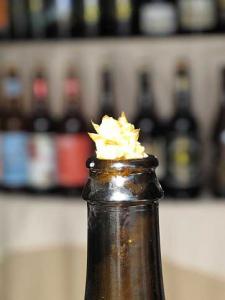 Christophe’s no-label beer proves the perfect accompaniment – it’s hoppy, balanced and with a citrus bite that cleanses the palate of the buttery mash between mouthfuls.
We could have ended there but Stephanie sent out a hunk of perfectly cooked cod, its skin crispy and its flesh delicately flaking and sat on braised and fried off cabbage and with a wild mushroom risotto on the side. Oh and of course more and more beer.

As we were finishing up a party of workers came in from the local brewery, ‘they drink their own beer all day long,’ Christophe said, having got them all seated. ‘They like to come here to have a change and see what’s new.’ Soon they too were shovelling down Smeus and necking a few beers too. I suppose a brewery worker who doesn’t come back from lunch smelling of beer is the exception rather than the rule in Flanders where beer is like wine to the French – indispensable at any meal.

Christophe is looking forward to the tourist season, by law all building work in Ostend must take place during the close season so the town is currently churning with heavy machinery, cranes and many roads are dug up. The result will be a more pedestrianised town, one even better for its ever-increasing number of visitors.

‘Our job, the job of all Ostend restaurants,’ says Christophe waving me off, ‘is to send visitors home with a good warm feeling, a feeling they had a great stay in a great seaside place with fantastic food everywhere they ate.” Well he and his wife are certainly doing their bit to make sure that’s the case. Smeus is the word!

Foodepedia travelled to Ostend with the assistance of Visit Flanders,  the Ostend Tourist Board and Eurostar.

Eurostar operates up to 10 daily services from London St Pancras International to Brussels with return fares from £59. All Eurostar tickets to Brussels are valid to/from any Belgian station at no extra cost. Tickets are available from eurostar.com or 08705 186 186. Fastest London-Brussels journey time is 1h51 minutes.