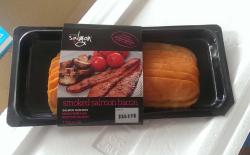 Smoked Salmon Bacon. Is it bacon? Is it salmon? Is it the result of an unholy inter-species breeding programme such as when a Daily Mail reader marries a Guardian reader and creates a super idiot? Well we had to find out.

The product is in fact 100% Scottish Atlantic Salmon cured with a blend of rock salt and sugar. It’s air-dried and smoked for 48 hours and shaped into thick slices or rashers

The idea is that when cooked these slices can be placed in bread and create a’bacon sandwich’ far lower in calories than a real bacon sarny, and also of course edible by those who cannot eat bacon for religious reasons.

It’s apparently gone down a storm in Canada, Hong Kong and even Denmark where bacon grows naturally in the fields, according to Wikipedia. Or perhaps we are making that up.

No one of course is suggesting that you won’t notice the difference in your sandwich; it is quite hard to confuse salmon with bacon, unless you have a very bad cold or have put a pint of ketchup in there too.

Cooked in the pan it tenses up like bacon and even takes on some colour, although our first attempt we cooked it too long in an attempt to crisp it. The packet warns against this, but who reads instructions?  It tasted of not very much when finally sandwiched.

So we tried again, pan-frying for a shorter period of time so it didn’t have any appealing colour but on the other hand wasn’t cooked to hell either. To make the whole meal healthy we served it with quinoa, as you do, and some oven roasted Lidl small tomatoes. Because we are poor.

And it was ok, visually it could have been better as you can see, but the fish had a pleasant smoked salmon taste, a toothsome texture and made a decent forkful. A squirt of lemon juice in the pan and maybe some maple syrup for colour would have been good

High in omega 3 fatty acids that are good for the heart and about the same price as bacon with six’rashers’ to a pack, it’s worth a try and available from Wholefoods Markets and Ocado .