‘It’s great to see the difference in your faces compared to a year ago,’ said Jeanette Brewer to an audience of fans, press and the odd bailed out Yuppie banker. ‘Either you’ve just got used to having a difficult time, or you’ve finally climbed out of it…’

Escaping Friday night chaos outside, I had come to the London Bridge sequel of Farringdon’s South African restaurant, ‘Vivat Bacchus’. In the bottle-lined basement adjoining one of two cheese rooms and cellar, the witty, feisty mind behind Springfield Wine Estate was confidently exhibiting her range. ‘My father used to say, if you make tea with a good heart, it tastes better, so I never have to worry about talking-up my wines.’

Compared to our capital, Brewer’s town of Robertson in the ‘valley of wine and roses’ must seem like paradise. ‘It’s beautiful and rustic with just one traffic light,’ she said. ‘We only use it on Sundays, so residents of the retirement home can cross to church. And that’s the only time there are accidents!’

Given a generous glass of Life From Stone ’09 (or more specifically, life from quartz) and instructed to ‘please smell, smell, smell’, Brewer explained the style. Honouring her heritage as a ninth generation Huguenot émigré from the Loire, Springfield was one of the region’s first producers to sew Sauvignon Blanc – Sancerre’s white grape.

Uncorked exactly a year on from harvest, it was vibrant: flinty, steely and even slightly salty, its acidity cutting dexterously through a duo of raw rock oysters. In contrast to the one rather tediously smeared with shallot and red wine vinegar, the chilli, lime and garlic spiked bivalve was pleasantly provocative, retaining its taste whilst evoking a Margarita.

In another twist, fresh mackerel tart was successfully enlivened by mint, rhubarb stalks and another mild hit of chilli. Whilst Springfield’s benchmark, Wild Yeast Chardonnay ’06 proved a cumbersome match, it was intriguing on its own. Aromas of fresh pineapple jostled candied pineapple on the palate, then cottage cheese and soured cream in the broad finish. Brewer followed with an anecdote, ‘When Noah made wine, he didn’t need a packet of artificial yeast.’ Fermented free from oak for a very un-commercial 70 days and curdled with nuances, Brewer explained, ‘there are around 300 families of yeast in our vineyards, and each leave their footprints of flavour.’ A relative newcomer to South Africa, apparently winemaker smugglers brought Chardonnay cuttings in suitcases during apartheid. 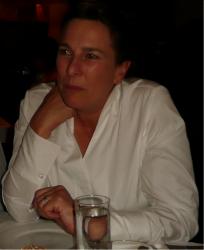 Being one of London’s few restaurants to offer South Africa’s emblem, the springbok (a fast antelope with a particular gait) I relished the chance to try roast haunch. The deep crimson coloured, musky meat was lean, served simply with crushed celeriac and béarnaise potatoes. It worked with the unfiltered, unfined Luddite of a blend, Work of Time ’02 – ‘a polite way of saying about f****** time,’ admitted Brewer of the 11-year journey to perfect a Bordeaux blend.

After only a nibble of cheese because I was still full from lunch, I sipped the dregs of another naturally fermented red, Whole Berry Cabernet Sauvignon ’07 with a boozy cherry clafoutis. Made from uncrushed grape clusters, the uplifting result was high class Ribena.

I was surprised to learn that Harry Faddy, Vivat Bacchus’ 27 year-old chef (an alumni of Knightsbridge’s legendary ‘Racine’, albeit not under Harris) had no direct experience of the Western Cape. However his menu had, in large part, thoughtfully provided a supportive role to Springfield’s bold, enduring wines and endearing ethos.

The first harvest occurred 2nd February, 1659 – recorded in the diary of Cape Town’s founder, Jan van Riebeeck. A Dutch surgeon, Riebeeck believed grapes and wine could see off the scourge of scurvy in sailors on the spice route. But his successor, Simon van der Stel, had more hedonistic motivations, founding the legendary Constantia estate, a version of which is still championed by chefs like Michel Roux jnr. who matches the sticky elixir with tarte Tatin.

During the French Revolution, British Forces occupied the Cape, exporting its wines to acclaim across the empire. Vineyards expanded into the early 19th century in anticipation of prospectors of gold and diamonds, ultimately resulting in a surplus. To release the glut, the government encouraged co-operatives to take charge, most notably ‘KWV’ in 1918, controlling planting, production and marketing.

During apartheid, the wine industry was isolated, with little reason for innovation or quality control. The most widely planted grape, Chenin Blanc (‘Steen’) was selected more for its ability to make dry and sweet whites and also brandy than flavour and finesse (although it is capable of both).

Since apartheid ended in 1994, producers like Springfield have thrived with a gamut of previously scarce varieties. South Africa is now the ninth largest producer in the world, encompassing a growing number of Fair Trade wineries, female winemakers and wineries owned by the majority citizen, the black South African.

Compared to Australia and California, which began making marketable wines almost a century and a half on from South Africa’s plantings, the Cape’s heritage feels rather more old world than new.

Find these wines on Wine-Searcher.com