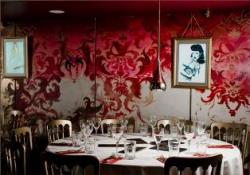 Volupte is an unusual venue. There is a slight shabbiness to it that accentuates its burlesque credentials. The bar area on the entrance level has a dark decadence to it that gives the impression of age, it is a long narrow affair in which it is not unusual to see their clientele, dressed or fashioned in 1940’s style, propped up against the bar, or on stools sipping vibrantly coloured cocktails. The restaurant and show area is in the basement of the building, its bold decor appears mismatched and incomplete in places, yet somehow coming together to create the impression of an era long since past. We were there to dine while we watched and took part in the judging of the V Factor, a competition that saw some 12 quirkily different acts competing for the prize of a three month contract as a resident act at Volupte.

So, the evening began. We sat and ate starters of Parma ham with rocket and parmesan shavings, lightly drizzled with some olive oil, and of gravadlax with some dressed salad leaves, each of which were simply presented and pleasant. While we guided each forkful into our open mouths, not solely down to the anticipation of the food, we watched two lithe young ladies, in separate acts being very imaginative in how they used a pole in their balancing acts, each I might say using some impressive muscle control and athleticism.

Our second course, of steak and chips, served medium rare – unusually we both chose the same thing – came with a good meaty jus that supported the steak really well. The steaks, were perfectly cooked, juicy and tender, they had good flavour. To go with these we chose sides of mixed vegetables and tossed green beans, all of which were cooked well. Whilst we ate our way through these plates of food we were treated to further sights and sounds to entertain us, including another contortion/balancing act, and a rather unusual act of a violinist being stalked by a male stripper – very odd!

Desserts arrived – a vanilla pannacotta with a chocolate sauce, and a chocolate fondant with vanilla ice cream. The pannacotta had a good texture, set well and with a good flavour, its accompanying chocolate sauce was smooth with an intense flavour, the two married together well and made a nice dessert. The fondant again had good chocolate flavour, but had been cooked a little longer that I prefer, lacking its gooey middle, the ice cream supported this pudding, lubricating it well. So, while we munched away at our desserts, yet more acts were paraded before us, demonstrating their flexibility and prowess, it was an interesting, intriguing and entertaining evening.

Volupte has a reasonably priced wine list with choices by the glass. Service was good in general. One of the attractions of Volupte is the style and decadence of the place and its entertainment, it does have good club like atmosphere and this makes it a rather different dining experience than you might have at other establishments. It is a place that should be experienced, whether for cocktails or other drinks, an evening meal with entertainment, or afternoon tea on a Saturday.