I’ve fallen down the rabbit hole. This is pure Alice in Wonderland stuff. In fact, our surly guide is 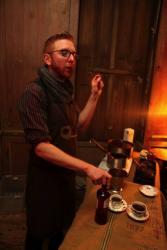 We’re in a creaky, somewhat dilapidated townhouse near Liverpool Street- or are we? April’s horrid howling wind and the lashing rain only add to the Highland atmosphere laid on thickly by the flickering candlelight, melancholy music and a choking smokescreen created by the roaring fire. At this stage, I would fully wager that at least one of our number will meet a sticky end.

A sticky-sweet end, perhaps- although our chocolate room treat is only the beginning. Thick, water-based hot chocolate is puddled muddily into chintzy teacups by chocolatier Paul A. Young. No whisky as yet- after the initial virgin slurp, though, it’s time to drop in a truffle laced liberally with Bowmore’s 15 year-old ‘Darkest’, to bring spirit to the beverage without losing the precious volatile aromas.

Meanwhile, the volatile Alice has returned, ushering us skywards. Literally so- we fetch up in an attic decked out like a planetarium, led on a virtual voyage to the very limits of the solar system. Mindblowing stuff- enhanced, no doubt, by the imbibing of a raisin-and-apricot Old Fashioned. Careful on that rickety staircase, chaps.

A cosy story in the living room, next- only slightly marred by the creepy presence of Mrs. Lock- a whey-faced, spectral old lady hell-bent on scrubbing a mirror clean and scaring the beejaysus out of us. The myriad collection of keys around her neck jangle as much as out collective nerves, soothed not at all by tales of the devil, a ghostly cat and a headless horseman.

So it’s with trepidation that we enter the luminous Mrs. Lock’s chamber, vying to sit as far from her 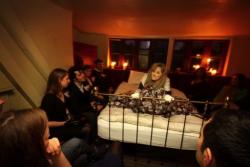 wrought-iron bedstead as possible. Those of us ‘lucky’ enough to have had their own key bestowed upon them have them duly seized, and, the lady seemingly appeased, we are curtly dismissed. No-one pulls the harridan up on her lack of good manners- we’re frankly only relieved to clatter down to the basement.

The basement which, for tonight, is the very essence of Islay- transformed into Bowmore’s legendary vaults. Host Dickie Truman’s hospitality teamed with much-needed and thankfully bountiful bottles of 15 year-old ‘Darkest’ soon turns the party from compellingly unsettling to completely unmissable. They say magic happens on the darkest nights and, when at long last we hit the pavement, it is, indeed, pretty darn pitch-black.

‘Magic Happens On The Darkest Nights’ was an immersive theatrical experience put on by Bowmore whisky. For more on Bowmore’s range, including 15 years old ‘Darkest’, www.bowmore.com