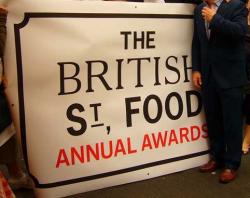 Street food need not be about ‘E-Coli, Mr. Whippy or sausages from a tin’ according to food columnist and broadcaster, Richard Johnson. Through his newly established British Street Food Awards, the 46 year-old presenter of BBC’s ‘Kill It, Cook It, Eat It’ hopes to uncover our most ‘razzle-dazzling, showman mobilers.’

Inspired by the ingenuity of square pizza in Milan which is ‘easier to eat on a Vespa’, bazaar buffets in Mumbai, where ‘restaurants are only for tourists’, and the ‘extraordinary’ Philippines, where chicken feet are nicknamed ‘Adidas’ and rectangular lozenges of pigs blood, ‘Betamax’, Johnson believes that now is the time to celebrate the offering closer to home. ‘We have revolutionised top end gastronomy in the UK – so let’s turn the spotlight on the sort of food everyone should be able to afford.’

Johnson sees our monochrome perception of British street food as a modern phenomenon. ‘In Dickens’ time, larks where eaten as a snack. I’d love to look at their portability.’

Whilst snacking on larks might come across as an abrasive concept for some (although not for me), British street food ‘can still be exciting,’ providing opportunities for fledgling entrepreneurs to cut their teeth.

‘Not everyone has £100,000 to start a restaurant, nor the patience to get to grips with the various boring A3 licensing problems. In fact I find the idea of doing up a trailer quite liberating, even sexy…’

Of close to an anticipated ‘100,000 mobile vendors’ working our streets, curbside success stories include the ‘Hurlyburly’, a school bus converted into a dispensary of ‘hippyish, whole earth veggie food’, the classically-trained Chocolatier, Petra Barren who vends Valrhona from ‘Choc Star’, a van bought off E-Bay and made-over by an international graffiti artist, and Tony Stoat’s porridge take-aways in Edinburgh. ‘You would not believe the queues leading-up to these guys.’

So far, Johnson has invested his own money into the awards, with design company ‘Fury’ contributing the quintessentially British logo. ‘I first worked with them when I was launching Sting and Trudie’s organic food range.’

But not everyone is as positive as Johnson. Apparently William Sitwell, Editor of Waitrose Food Illustrated believes street food leads directly to ‘eating on buses’ (other than the Hurlyburly), whilst accountant turned cookery school owner Angela Malik wonders whether this is ‘another initiative speaking to the ‘Waitrose’ class.’ As a regular trader of meals on Acton market, Malik calculates a harsh economic reality for those truly dedicated to good quality ingredients. ‘Keeping prices low is incredibly difficult – fine if passion is what drives you rather than a need to make a living.’

However fellow awards judge, Marco Pierre White, who was also present, looked beyond economics. ‘What makes this beautiful is the jigsaw of opportunities – every pocket is different and we shouldn’t be resentful of people buying saveloys with onions.

I asked Johnson what food genre he would specialise in if he were ever tempted to give up pen and pixels in favour of a rotisserie on the road. ‘Something very simple – a menu two or three dishes deep. I’m rather good at eggs.’

As well as Johnson and White, the rat-pack of judges includes Anthony Worrall-Thompson and Mark Hix. ‘It feels a bit masculine,’ Johnson admitted, ‘although that will change.’

The project’s website, www.britishstreetfood.co.uk, will open for public nominations on 6th October coinciding with International World Street Food Day. Seven categories will be announced and are likely to include best burger, best ice cream, best European and best world food, with an overall winner ‘and perhaps a people’s choice’ award. Johnson is then committed to personally investigate vendors ‘as soon as they start coming in.’

Shortlisted mobilers will take part in a ‘cook-off’ in September under the shadow of Ludlow’s medieval castle. Whilst the picturesque location represents ‘the home of one of the best annual food festivals,’ there is a more personal connection too. ‘I used one of the butchers on the ‘Sausage Trail’ (residents of Ludlow will know what I’m talking about) to supply the bangers for my wedding breakfast there!’

Despite prizes of ‘kudos’ rather than cash, Johnson hopes that the interest generated by the awards will inspire a new era of mobilers ‘capable of feeding us well, alleviating boredom and therefore rehabilitating our city centres, particularly at night-time…’