From the moment I wake, to just before I start on the evening’s wine festival, I like a nice cup of tea to be in my hand. I’m not so devoted that I’ve become one of those strange, sad, people you see on the train clutching a thermos mug, but I don’t like the office kettle to go cold.

Of course I drink’proper’ tea. The black stuff. None of your girly tisanes for me, Chamomile? Can’t abide it. Rasberry? Rubbish. However the green and white teas are interesting and there is more to black tea than Tetley’s.

So having blagged a load of free tea samples, we would have preferred samples of champagne obviously, however we’re not The Telegraph here, we put the kettle on and lined up an impressive array of chipped teapots, brown ringed mugs, cups with the hotels’ names still on them and a small bowl the dog once used. Not very scientific, perhaps, but certainly real world.

The boy’s drink the black stuff 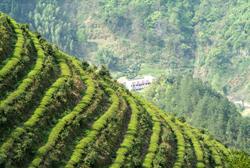 First a classic black tea Ã¢â‚¬â€œ Kericho Ã¢â‚¬â€œ this gets its name from the district in Kenya where it’s grown, west of the Great Rift Valley. Kenya of course is where young aristocrats, sent away from the UK, had such fun in the early years of the 20th Century and while they may have preferred stronger drink, tea was popular. Today over a third of the tea we drink comes from Kenya. Kericho Gold Premium Tea is 100% Kenyan and we found it really’tea-like’. Strong (it needs 4 minutes brewing) and bright it had a really refreshing taste and stood out from the control brew made with A.N.Other tea from the supermarket.

This is a connoisseur’s tea, although PG Tips is in fact the main buyer of tea from this region, Kericho Gold is a blend of carefully selected black teas handpicked from the Highland’s pesticide free gardens and packed at source in Kenya. Kericho Gold is available both in tea bags or loose tea leaves exclusively from the online Typhoo Shop www.typhooshop.com with prices starting at £0.69.

Next some green teas. Now green tea is supposed to be a real health drink, chock full of antioxidants, but then everything claims to be that nowadays, with the possible exception of Pringles and Pork Scratchings.

Heath & Heather produce a range of teas of all types and this Organic Green Tea is from their, you guessed it, organic range. Twenty bags in a box and from China of course, this needed 5 minutes to brew and frankly, I’d have left it a bit longer, around 20 years in fact as I am not much of a fan of Green Tea.

However if you are going to go to the trouble of drinking Green Tea Ã¢â‚¬â€œ and I mean what’s the point of tea you cant dunk your digestive in? Ã¢â‚¬â€œ then organic makes sense. What don’t make sense are the claims that Green Tea can help you lose weight. Scientific evidence is there none, but perhaps by drinking lots of green tea you feel so ill you don’t want to eat afterwards? Heath & Heather wisely make no unsupported claims and their tea was definitely liked amongst the office Green Tea Hippies.

Green Tea connoisseurs can be as bad as wine buffs; they actually want to know not just where the tea grew, but on what side of the hill and on which day it was picked. They stop short of asking for the picker’s social security number because, being Chinese, it would probably cover two pages.

For such experts there is Jing Tea. The Green Tea we had in front of us – Organic Dragonwell Green Tea Ã¢â‚¬â€œ was, according to the packet, picked on 5th April 2009 from Cedar Hill Garden. These details allow experts to check on the weather before and after that date and decide if the picking was optimum. The non-experts certainly claimed this tea was superior stuff, picking over the tea leaves like The Furry Freak Brothers assessing a’lid’ of grass.’It has a real aroma, before and after brewing,’ they reported.’And it has depth too, not all water like some Green Teas. The colour’s bright and the taste is really quite complex.’ £6.90 for 50g though, so not cheap but the best rarely is. www.jingtea.com

My favourite was Solaris Green Tea Chai, winner of a Great Taste Gold Award in 2007. This is more than just Green Tea, in the mix is Sencha Green Tea, Cardamom, Cloves, Star Anise and lemon and orange peel. I love normal Chai, hot milky and sweet and made with black tea, but this was good too. Not as powerfully pungent as tea made with fresh spices (for a great cup of Chai go to Mooli’s in Soho btw). The sturdy little cardboard container is more practical than a foil wrap too and the blast of spice each time you open it is very intoxicating. It’s available from their website and as they are based in Ireland, prices are in Euros. www.solarisbotanicals.com

All white on the night 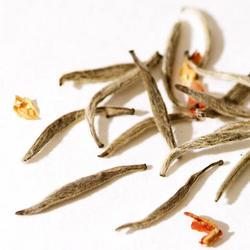 China White tends to make me think more of Iggy Pop than Chairman Mao, but Chinese White Tea is really up there in the clouds, almost literally. Silver Needle (Yin Zhen) is considered the rarest and most famous Chinese white tea, composed entirely of individual buds, picked and sun dried in early spring high in the mountains. The Jing Silver Needle was again picked in spring and had flavours of cucumber and melon. Really rather special this one, we used the teapot out of reverence for its provenance. www.jingtea.com

Getting into the world of tea is rather gratifying Ã¢â‚¬â€œ the range of teas available, and the quality, is wide and vast. Some teas are morning teas, some suit the afternoons. Some are bedtime cuppas. All require preparation with love and care, ritual really, to draw the best out of them. Check out the specialists above, many offer online tutorials and online shops for elegant tea pots and cups.

As coffee shops vie with mobile phone shops and pawnbrokers for control of the High Street, we need to resurrect tea as the true national drink of the nation. Not just the classic black tea, but the green,the white and the red (Roobuis from South Africa) too.

Now who’s going out for the Hobknobs?