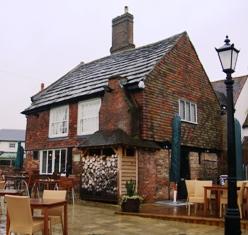 We had heard good things about Whites, particularly since head chef Stuart Dove, who has worked under Gordon Ramsay and at a number of Michelin Star restaurants around the world, took the helm last year. So, for a day out we travelled to Steyning in West Sussex in order to sample Stuart’s food for ourselves. Just over an hour from London by train, we travelled to Shoreham-By-Sea station and as we were early, decided to add to the adventure by getting the bus from Shoreham to Steyning – about a five mile journey – intrepid explorers that we are. Steyning is a pretty West Sussex village its High Street boasting several niche shops. Occupying a fairly substantial corner plot in the High Street you find The White Horse, where Whites Bar and Kitchen is situated. The establishment is a nice mix of old and new, it has an inviting long, fairly narrow bar and lounge area and towards the rear of the plot a more modern glazed structure has been added, like a very substantial greenhouse, this is Whites Bar and Kitchen.

We had a glass of chilled sauvignon Blanc at the bar while we sat and perused the lunch and bar menus. There were lots of interesting options, and one feature we particularly liked was that each menu item had the food miles that the main constituent parts had travelled. We were told that most of their food is locally sourced from within a 35 mile radius and a large amount of items were sourced within ten miles of the restaurant.

We chose starters of mustard crusted ham hock and the local game terrine. The ham hock was a lovely sweet piece of meat, very tender and juicy and set off perfectly by its mustard crust. This was sat on top of a delightfully smooth watercress and celeriac puree. Served with some poached pear and a sherry and raisin vinaigrette drizzled around the dish to finish it off, this was an excellent dish. Each constituent part tasted wonderful, together it was amazing. The thick slab of chunky local game terrine was served warm, having been seared immediately before serving. It was a treasure trove of different meats , served with some lovely fresh tasting greengage chutney, little cubes of sweet tasting mulled wine jelly, green beans and toasted walnuts. This was another great taste combination and an excellent dish.

It was ‘Fishy Friday’ and there were a number of specials on the menu. I was hooked myself by the pan fried plaice with seared scallops, both the fish and scallops cooked perfectly in a lovely lemon butter, sufficiently strong to add flavour, but not to overpower the delicate fresh seafood. These were accompanied by some of the best crunchy chips I have eaten and a dish of mixed salad which had a light oil and slightly acidic dressing, which i loved. The pancetta rolled chicken breast, which we understand is cooked in a water bath, then finished off by crisping up the pancetta in a pan, came with crispy chicken nuggets, from the thigh meat: both elements had good flavour and the contrasting textures were great. These were served with an intensely full flavoured creamy cognac and mushroom sauce and some very good potato balls, another brilliant dish.

The local potato vodka and bitter chocolate martini, sherry sorbet and pistachio biscotti just cried out to be ordered for dessert, and it really didn’t disappoint, the voluptuous velvety chocolate mousse sat on top of the sorbet, which was almost semifreddo in its texture, it was divinely decadent. The spiced butter baked russet apple, was indeed buttery, its core was filled with calvados flamed dry fruit, a little like syrupy, but not overly spiced mincemeat. This was accompanied by some thick pastry cream and a scoop of salted caramel ice cream that had a good rich velvet feel in the mouth, but wasn’t too sweet – certainly a winner of a dessert.

Whites has a good range of reasonably priced wines by the glass, carafe and the bottle to suit all tastes. Service was relaxed and attentive, we were well looked after, there is a good feel about the place. As well as the more formal dining experience, Whites also has a very good bar menu that features a range of deli boards and allows the customer to design their own. We saw some interesting arrays of food heading towards the bar from the open theatre style kitchen that sits in the corner of the restaurant.

Whites Bar and Kitchen is a remarkably good restaurant. We ate perhaps the best food we have had outside central London for some months. We would certainly recommend it to anyone who can travel to Steyning and could see it becoming a destination restaurant.