199 attempts at a chocolate cake? 3 months and counting to boil the perfect egg? The lengths some people go to in the name of decent nosh. Well, not people per se, but, for the test cooks of America’s Test Kitchen, these remarkable feats are just a standard part of the daily grind. At their helm, one man- Chris Kimball, walking gastronomic encyclopedia and, quite frankly, culinary genius.

He may not come from a scientific background, but you could’ve fooled me. A self-proclaimed, 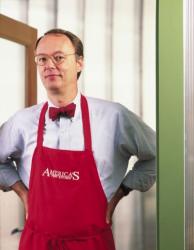 self-taught hobbyist cook, his speech is peppered with complex chemical reactions, esoteric gastro-theories and spot-on times and temperatures. Modest and humble, perhaps, but when it comes to the kitchen, Kimball is nothing less than a highly seasoned expert.

And every ounce of that expertise is pressed into service as founder of ‘Cook’s Illustrated‘ magazine and host of America’s Test Kitchen, now entering it’s 11th television season. For the culinary anorak, ‘Cook’s‘ is a peerless publication- a monochrome feast of product reviews, domestic science and concrete kitchen wisdom- each recipe resplendent in its flawless, anal-retentive glory.

The move to the big screen means no hiding for the three dozen test cooks who work tirelessly in the Boston-based, 2,500 square foot kitchen, on tricksy, deceptively simple recipes, such as that for the perfect soft boiled egg. So far, Chris says, it’s been a three-month crusade, involving a vigorous pre-cook, 15-second shake to centre the yolk of each and every egg. And still the quest continues.

The poor cook who finally cracked that chocolate cake after almost 200 attempts suffered even further with a foolproof fudge recipe, Chris reveals. In fact, so complex were the techniques required, so numerous the variables to control, that the recipe was never even published. Once you understand the properties of even the most basic ingredients- eggs, sugar- you understand just how finicky they can be.

Lucky, then, that Chris and his team are every bit as finicky as the materials they work with. Although he’s a big fan of culinary innovation, with a trip to Yotam Ottolenghi’s Nopi the highlight of this brief London visit, he’s vehement that creativity has never been part of the remit for either Cook’s Illustrated or America’s Test Kitchen. Rather, he opines, it’s their job to instill a solid working knowledge of basic kitchen science and skillery in their audience.

And, for that, people are grateful. Almost ridiculously so, in fact- Chris cites examples of being accosted by tearful cooks, ecstatic at having mastered a juicy roast chicken or perfectly chewy brownie. Once he’s helped put those foundations in place, Chris sees scope for experimentation- as long as there’s a good understanding of the alchemy, creativity can flourish with a much higher success rate.

Because who wants to waste time and money on expensive ingredients, equipment and recipes when the results end up consigned to the bin, or, perhaps worse, generate revulsion and ridicule from your nearest and dearest? Around 90% of published recipes are flawed and, as Chris rightfully points out, what other industry thrives on the fallibility of its core material? Yet cookbooks fly off the shelf for that very reason- that the last one purchased just didn’t work.

It’s the same with gadgets. Although Chris does rate a few- Microplanes, Cuisinart slow cookers, Breville juicers, and Thermapen thermometers. He’s also has had his fill of inadequate pineapple slicers, $300 knife sharpeners which don’t live up to the name, and pizza stones that get hot enough to cause house fires. The more you cook, he claims, the fewer toys you come to rely on. And Chris is a man who cooks quite a bit.

So what, then, fills his own kitchen shelves? Victorinox carbon-steel knives, for one, also used 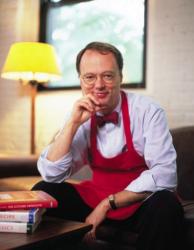 throughout America’s Test Kitchen– he reckons a chef’s knife, and ones for paring, boning and cutting bread should do you. Add in a skillet, saucepan, knife sharpener and decent cutting board, an accurate set of scales and that trusty staple- the wooden spoon. An oven thermometer’s not a bad buy, since temperatures can vary wildly, putting paid to that crusty loaf or airy souffle.

And in that kitchen, you’ll find Chris indulging his passion for baking; rustling up an Ottolenghi recipe featuring lentils, walnuts and Gorgonzola; or preparing the game shot around his Vermont home. He likes rabbit hunting for its social nature- conversely, deer stalking requires silence and stealth. Two years ago he netted a 150-pounder, but claims you can go an entire season without even a glimpse.

Chris favours Middle Eastern cuisine, liking the effects ingredients like sumac, baharat or pomegranate molasses can have on simple dishes. Classical European food, he thinks, earnt its reputation for technique owing to the limited repertoire of ingredients available. Conversely, countries with more diverse larders tend to use more simple preparations.

But, as we’ve seen, simple is a relative term. Behind every recipe there’s a veritable minefield of execrable instructions, erroneous cooking times and errant ingredients. With every retest, the culinary crusaders at America’s Test Kitchen are skewing the odds further in the home cook’s favour, putting an end to sunken sponges, and inspiring yet another wave of fail-prone individuals to conquer the chocolate chip cookie. And the endless search for perfection marches forth- Chris Kimball surely the most intrepid explorer.

Season 11 of America’s Test Kitchen airs on PBS (Sky 166 and Virgin Media
243) from Monday 2nd July, weekdays at 8.50am and 2.55pm. For more information, visit http://www.americastestkitchen.com
Subscribe to Cook’s Illustrated online at http://www.cooksillustrated.com