It’s now rolling into the UK, Reblochon has descended from the French Alps but don’t just save it for the cheeseboard

It’s a bit whiffy the Reblochon, so much so that it comes sandwiched between the traditional pine boards and in a sealed plastic pouch. Once that’s popped open the heavenly aroma wafts around the kitchen in a way that inspires rabid appetite.

It’s made from cow’s milk, the richer milk that was traditionally left in the cow until taxes were paid on what had been produced. A sneaky trick to ensure the farmer got some of the best milk for’free’. The milk is’raw’ unpasteurised which is why you won’t find a Reblochon in the USA, the poor darlings are scared of unpasteurised

It began in the ThÃƒÂ´nes valley in the 13th century and was awarded AOC in 1958 and is always produced above an altitude of 500 m, in Haute-Savoie and in the Val d’Arly in Savoy. One of the three kinds of specific cows that produce Reblochon in the Savoy region is the MontbÃƒÂ©liarde, a cow famous for that other great cheese, Comte. The classic times to eat Reblochon are now and in late spring when the cows have been eating the rich grass and cows graze on some very fine pasture indeed and it’s reflected in the cheese.

The dusty white exterior is a fine mould, the result of weeks of ageing and the cheese has a pronounced in its soft centre.

It comes into its own when used in a classic Tartiflette, a Savoyard gratin made from potatoes, bacon (lardons), and onions. All good things.

And then there is Flammekueuche; a pastry base topped with onions, lardons, cream and Reblochon. A bit of a naughty treat but when it comes out of the oven and that cheese has melted, well… and in fact despite appearances, Reblochon is just 22% fat, the creaminess comes from the moisture trapped inside. So tuck into this recipe and find more (in French) on the Reblochon website. 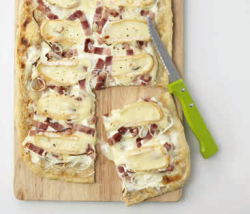 2.       Spread out the dough as thinly as possible in the shape of a rectangle, and place it on a piece of greaseproof paper.

3.       Peel the onions and chop them finely, then cook with some oil and add the lardons. Set aside.

4.       Cut the Reblochon into thin slices. In a bowl, mix together the cream and the soft fresh cheese, add salt and pepper and spread the mixture onto the dough.

5.       Spread out the cooked lardons and onions on the dough and place the Reblochon on top of it.

6.       Slide the Flammekueuche onto the hot baking tray and let it cook for approximately 8 minutes.