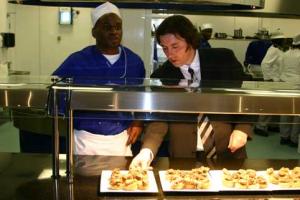 ‘I’m trying to get hold of mulberries. Have you ever had one?’ asked Executive Chef, Alberto Crisci MBE. ‘I tasted my first ten days ago and have got to get them on the menu!’

Whilst this would seem a straightforward remark in a ‘normal’ restaurant, it became surreal in a space as secure as a safe in the company of burly guards and their prisoner charges.

Opened at the end of May, the 85-cover ‘Clink’ restaurant at category B, High Down prison, is one of the most exclusive restaurants in the world. To secure admission you must either prove an interest in rehabilitating prisoners, or rob a bank. As Neapolitan-blooded Crisci puts it, ‘you only get in if I let you.’ And also out – it is certainly not the place to attempt a drunken runner (and despite so many bars, alcohol is banned). Covering different territory to Crisci’s chief responsibility of supplying 3,000 meals at £1.68 per inmate, per day in the main canteen, this ambitious venture is Britain’s first to bring gastronomy to gaol for appraisal by civilians.

With electronic equipment embargoed and sporting an ID necklace, I felt trepidation awaiting my escort. Looking around, my eyes were drawn to the ‘Good News’ board, papered with an orderly arrangement of letters. Via one drawing-pinned Photostat, prisoner Anthony thanked Justice Secretary, Jack Straw for orchestrating a ‘forgiveness course’, which imparted ‘confidence’ and ‘an aura of self-belief for the first time.’

Surname announced, I was led through sturdy steel gate after gate framed in foot and a half thick concrete towards a courtyard fringed with sheer barbed railings and busy with prisoner transporters. Surpassing my expectations, the final anonymous-looking door swung heavily onto a scene that was – pardon the pun – arresting…

What was a clothing exchange store has been transformed into incongruous decadence by ‘Ishoka’, the interior design consultancy run by Derek Taylor of ITV’s ’60 Minute Makeover’. But its planning and fundraising took more consideration than a lifestyle show. 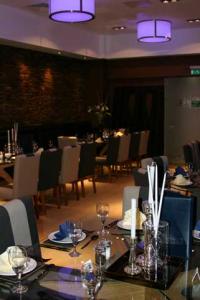 The idea that prisoners could be rehabilitated through gastronomy was born out of a series of experimental dinners Crisci held in a spruced storeroom four years ago. One guest, Casilda Grigg of The Telegraph, spotted the potential that growing, picking, cooking and serving produce to civilians offered prisoners – a preparation for release day reality. Crisci recalls, ‘as Grigg left, she said ‘you should open a restaurant’ and the thought stuck.’

Following an investment of £550,000 raised in part by charitable trusts like Kevin McGrath’s foundation (the former Chairman of QPR football club) and the result is sparkling, air-conditioned, self-sustaining elegance. A computer-controlled lighting system, which spins through a rainbow of colours, illuminates graceful wooden-framed tables, deep leather sofas and tactile chairs. Of the fact these were crafted by prisoners at Frankland, County Durham, Crisci says, ‘you can forgive the occasional wonky one.’ Soft, faux crocodile panels and a mushroom-coloured tapestry embroidered in High Down’s sewing workshop offset the severity of chipped slate walls. The lid of an ultra posh salad bar – one of only two examples in Britain – electronically raises and lowers with an action as swish a Ferrari canopy.

Mezzanine, a plate glass wall etched with prisoners’ poetry lends discretion to the private room. Featuring a blonde table inlaid with ‘Clink’ in marquetry, it has become a popular meeting place with prospective employers like De Vere and Hilton as well as supportive organisations, the Women’s Institute and Rotary International.

I was greeted and seated by velvet voiced, gliding Madrileño Maître’d, Francis. It seemed like satire that this former resident of High Down once in for smuggling willingly returns to work here five days a week – the same story as head chef, Dean. Of Francis, Crisci remembers ‘spotting his style at the storeroom dinners four years ago – and he’s been with me ever since.’

Following checks on health and behaviour, prisoners who apply to The Clink must qualify their intentions over a fortnight in the main prison kitchens where 35 cater for 1,100. Should they succeed, Crisci is swift to underline his policy of zero tolerance. ‘If I say jump, they’ve got to jump on the spot.’

Once seated at a glass-topped table laid with plastic cutlery according to prison rules, I met waiter and ‘listener’, Claude, who is originally from Villejuif, one of Paris’s edgiest suburbs. Serving the second year of a 14-year sentence for drugs offences, Crisci has encouraged him to study NVQs and City & Guild qualifications whilst furthering his interest in patisserie. Considering that very little baking occurs here (yeast could have a role in moonshine) this is a privileged position. Becoming increasingly engrossed in gastronomy by the day – devouring culinary tomes and eagerly completing homework set by Crisci – Claude appears absolutely focussed. He told me, ‘serving my wife a meal in The Clink was my proudest moment.’

As a law-abiding luncher, it was at first odd to accept a staff united by criminal records. But Crisci’s philosophy to ‘break down barriers through interaction’ works. ‘This is our vehicle to challenge preconceptions. After you’ve eaten three courses prepared and served by the prisoners, you’ll realise that they’re not all crazed, two-headed monsters.’

Within the spacious kitchen fitted with a stunningly beautiful, bespoke Molteni stove, composed chefs clad in ‘HMP High Down’ motiffed whites make everything, from stocks to pasta, and ice cream to coulis. 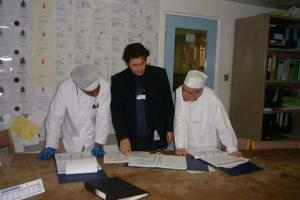 On Claude’s recommendation, I started with a simple but carefully cooked Portobello mushroom filled with garlic and Cheddar (£1.80), followed by succulent, lightly steamed sea bass (£5.95). This came from supplier ‘Ocean’s Catch’, which is run by an ex-policeman and his son. It came with crisp, lightly buttered vegetables which I later learned took two attempts to perfect. Crisci mentioned that they are grown on-site ‘under four giant polytunnels.’ Finally, positively tacky meringue with a medley of lush fruit ice creams looked and tasted moreish enough for neighbouring diners to ask for the same.

Over time, Crisci plans to introduce more complex dishes, the most notable of which is his signature prawn cocktail. ‘It has lemon and lime for acidity, olive oil for texture, chilli for heat and avocado sorbet to balance.’ As the restaurant enters its first autumn, hearty mutton ‘with sharp apple compote’ might also appear. ‘I don’t know why more people don’t eat more mutton,’ pondered Crisci, ‘cooked slowly, it becomes tender.’ Considering the airline style plastic cutlery, let’s hope he’s right.

As I adjusted to the peculiar sight of guards grouped around candelabras discussing gastronomic nuances, and the large group of family and friends marking an 80th birthday with a spectacular cake baked by Claude, I almost relaxed. But the continual clatter of keys rose above the sound of the Beach Boys.

At the end of service, I listened to Crisci read feedback forms to an expectant brigade. Whilst mostly positive, comments such as ‘starter cold’ solicited an ominous, ‘we’ll find out what happened there.’

These are early days for Britain’s first prison restaurant, although seeds have already been sewn for hopeful futures. Examples include Miguel, who has picked up enough skills to secure work at an independent gastropub. Inwardly, I wondered if prisoners might find the culinary facilities outside a little dismal compared to the pristine tools available inside.

Crisci’s drive, humanity and reach is transparent. ‘The Clink is not a gimmick,’ he said. ‘We’ve gone from being a prison where employers couldn’t be contacted to them contacting us. Novelli’s already been in to see what we’re doing, and Locatelli’s due to cook with the prisoners soon. One day we want to be nominated for an award based on the cooking.’

After coffee from a Gaggia machine, I shook hands with Crisci, Francis and Claude and followed the guard back into the courtyard. Having been seduced by Taylor’s lavish interior and Crisci’s enjoyable food, it only now occurred to me that one of them wouldn’t be leaving that evening.