Even non-cognac drinkers have heard of Courvoisier, so when Lara got an invite to a mysterious Courvoisier event in Paris she was onto the Eurostar faster than you can say ‘la plume de ma tante’. 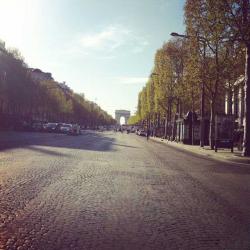 If there was a time that Paris was the centre of the universe, it would have been the Golden Age. As the world said goodbye to the 1800s and welcomed the 20th century, it seems that Paris was having its moment. I’ll throw a few names at you to get the gist, Lumiere, Eiffel, Renault, Escoffier, Curie, Pasteur, Gauguin, Matisse, Picasso, Zola, Proust and Baudelaire…think Moulin Rouge, Maxim’s, Les Deux Magots and the HÃƒÂ´tel Ritz and you’ll see a picture forming of a city in the bloom of its cultural prime.

And now, let me throw another name at you, Courvoisier. Chances are you know this name whether you’re a Cognac drinker or not. This is a brand that doesn’t have to create spin, a name that is steeped in the annals of history by fact and association. It was glasses of Courvoisier that were raised at the inauguration dinner of the Eiffel Tower, it was the favoured tipple of Napoleon Bonaparte, it has partnered with the likes of Vivienne Westwood and ErtÃƒÂ©, been awarded the Prestige de la France, made a splash in the music world with Busta Rhymes and favoured as an ‘excellent singing potion’ by Fleetwood Mac’s Stevie Nicks. 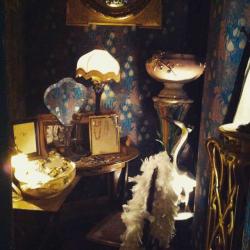 So when the invitation to a Parisian press trip hosted by Courvoisier came – without hesitation – I was in. And from the champagne and pastries on the Eurostar trip over, to the farewell breakfast at LadurÃƒÂ©e on the Champs-Ãƒâ€°lysÃƒÂ©es, everything about this trip was as luxe as I’d hoped it would be.

No one of us in the group had any idea what the trip was about, but we suspected it was something big. As we stared at the horses and carriages that pulled up outside our four star hotel, we had the feeling that Courvoisier wanted our attention and good Lord, they had it. And it seemed we had the attention of all Paris as we trotted, very slowly, along the cobbled streets en route to Maxim’s.

If you’ve never heard of Maxim’s then pick up a book once in a while, watch a film. Maxim’s was the place to be in Belle Ãƒâ€°poque Paris and where we were set to spend the evening. To whet our cultural appetite we were taken on a tour of the restaurant’s Art Nouveau Museum, where over 550 pieces of artefacts collected by Pierre Cardin are displayed over three floors. Some more names I can throw at you here are Tiffany, Majorelle, Galle, Massier, Toulouse-Lautrec, Lalique.

So often you find that icons, after the fact, suffer under the illusion that the name will be enough. But I was pleasantly relieved that all the courses and all the wine were excellent, even for such a large event. And likewise the Cognac was indeed, of the utmost finesse. 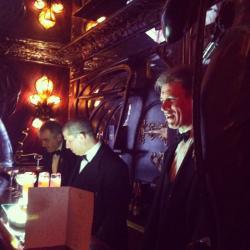 Once everyone was suitably lubricated, stuffed and primed for the big speech, the reason for the big event was finally revealed. Courvoisier, a household name for almost 200 years was getting a makeover. That familiar old blue label is in the process of being transformed.  Drawing from their enviable heritage and the iconic elements of the Golden Age, Courvoisier’s design team has incorporated architectural elements of the Eiffel Tower, grand gestures of the age along with the finest details to give the new packaging of this prodigious name a modern look. 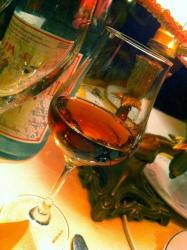 By reinvigorating the Courvoisier brand, Beam Suntory are hoping to make their Cognac once again, the toast of choice; to deliver a product that is a bit more ‘now’, more feminine,  a little bit more like something that has pride of place in the hippest bars and cabinets of London, rather than a dust-collector in Grandpa’s study.  The brand as we know it is taking a rushing leap into the new golden age; but it’s not the warm glow of gas light that illuminates the path, but the dazzling glare of digital age.

I won’t have to look out for the new packaging that’s due to hit the shelves in autumn this year. I’ve already seen the future of Courvoisier and it’s beautiful.