Breville, now there’s a name you don’t really hear much of anymore. It’s not like Ronco, gone to the great brand graveyard, and yet there was a time when it strode the world like a colossus whilst now it merely wanders about like a lost kid in a mall.

They were famous for their sandwich toaster; it may even have been the product that made the company’s name and fortune. My family had one, every family had one, and after initial manic use they either ended up under the sink along with the Ronco button master and with their plugs removed by a dad too indolent to go to Woolworths, or they were solemnly bequeathed to a child about to go to University.

That’s how I got mine, my mother feeling that I would otherwise starve. In fact I had already mastered the art of making spaghetti Bolognese as well as curry/stew (one contained curry powder, one didn’t) so I was quite safe. All I recall about using the Breville at university are clouds of acrid cheesy smoke on the staircase by my rooms and the college porter giving me a lecture on fire drill.

Seeing the Waring sandwich toaster emerge from its styrofoam for the test was like seeing an old friend who’d become successful and better dressed. The Waring glints with stainless steel, reflecting Waring’s strength in the pro kitchen appliance market, and it looks a lot more solid than Le Breville d’antan. The control knob on the front is the only bit that seems cheap; it wobbles rather than turns and there is no satisfying click. 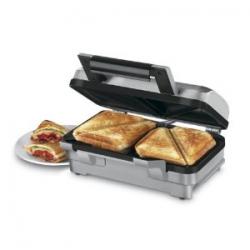 The real improvement is the hot plate side of things though, not only are the plates deeper they are also non-stick and removable for washing. At a stroke these features make the Waring a far more serious and sensible proposition than its ancestors. The old sandwich makers required copious amounts of butter on the side of the bread that touched the hot plate to keep them from gluing fast. And because the old plates were fixed in place, you had a real job on your hands getting them clean when (not if) the sandwich did stick.

You were also basically frying your sandwiches, something rather frowned upon these days so it’s an improvement not to have to use lots of butter, although a small amount wiped on the Waring’s plates does no harm and improves the colour of the finished toastie.

In action it’s the same old routine. Place bread on bottom, add toppings, add second slice of bread, and clamp down the lid. What bread is best is a matter of trial and error, rather like bacon sandwiches we think a toastie is best when you use the cheapest white bread you can find. The video’s recommendation of focaccia is dutifully middle class, but you need the grip of a Russian female shot putter to get the lid closed and the latch secured.

After that you wait. When smoke starts to emerge you can reckon your toastie is done. The Waring does a good job of sealing the edges so that molten cheese doesn’t escape, something the Breville wasn’t too good at, and the resulting toasties have decent crunch and the familiar sensation of third degree burns to the roof of your mouth. Let them cool down is a top tip,

There’s a place for a sandwich toaster in everyone’s lives, and as the Waring is quite compact, in the kitchen too. A definite kid pleaser as well as a family one and first year students could do a lot worse than asking to be kitted out when they make the leap and leave the nest.

Availabe at Argos, Amazon and many other stores at around £50.00