The food from fleet footed, uber healthy home delivery service Bonapeti is the sort of food you’d eat everyday if you were a Hollywood celebrity with golden, glowing skin and perfectly toned abs. It provides the sort of complex, carefully prepared meals that you would normally only get as a top dog with a personal chef who did all your worrying about sugar and carb intake for you. In short, it’s the sort of food that you shouldn’t be able to afford to eat everyday but, actually, it turns out you can. 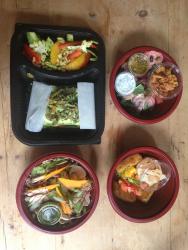 Bonapeti has broken into the market on the crest of the new wave of at home healthy eating; where packed lunches packed with protein and nutrient laden snacks are no longer confined to detox diet savants and raw food bloggers, they’ve crept into every aspect of our health conscious daily lives.

To provide these modern and, let’s face it, hugely foodie fashionable ready meals, Bonapeti combines a handful of bright young chefs and food creatives – whose CVs list stints everywhere from Nobu and The Fat Duck to Ottolenghi’s joints – with an seemingly endless supply of exotic ingredients. Their ever-changing weekly menus feature cuisine from far flung countries like Latin America, Asia and the Middle East…not so surprisingly there isn’t much traditional English fare to be found so you’re out of luck if you’re after a sunday roast delivered to your door. 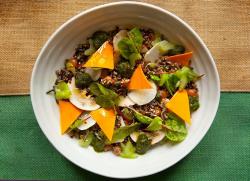 Bonapeti specialise in the kind of plant based, sugar and gluten free, veggie or vegan food that would even make the most macrobiotic Gwyneth Paltrow in your life happy, but there are meat and fish options on offer too and each dish is individually made on the day of ordering to restaurant standards – with an about average restaurant price tag attached.

Prices range from about £10 per main course and £4.50 for side dish to £3.50 for desserts and, before you scoff in outraged disbelief, try to remember how much you spent when you last popped into Pret or Eat at lunch for’just a sandwich’.

As the sort of home cook who veers wildly from indulging in whatever’s in the fridge (which has, on occasion, included a tube of squirty cream and an entire pack of ham when the cupboard was bare) to self-consciously healthy veggie dishes, I can’t deny I wasn’t excited when Bonapeti sent a whole box of lunch options for me to work my way through.

At first glance, these meticulously made and packed portions looked miserably insufficient. On the plate, this didn’t actually change. By the end of my side dish portion of marinated and roasted beetroot with puy lentils, dill coconut yoghurt, orange and pistachios, I was strangely satisfied and my meat eating, sugar craving self mollified by the intriguing mix of earthy, unseasoned beetroot, juicy, sharp orange and fresh, almost metallic dill yoghurt. 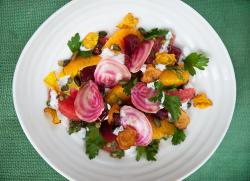 My lipsmackingly spicy pudding of chilli marinated pineapple with toasted coconut, mango and papaya was delicious, save for a few pieces of tough, underripe pineapple. I wasn’t as keen, however, on the main dish I tackled: a marinated courgette’lasagne’ where raw strips of the vegetable were layered between piles of dried tomatoes, chopped walnuts, olives and a parsley pesto. Raw and healthy it was and the side salad of sliced broccoli with calabrese, pine nuts and oranges was divine, but I found that the charms of soggy layers of overly sharp and overly salty lasagna soon wore thin.

One thing that unites all these dishes was both their health content and their aesthetically pleasing appearance – there’s no denying that if you plated these up at a dinner party or pulled out a lunch box of them in the office you’d attain a new level of Ella Woodward-esque majesty. 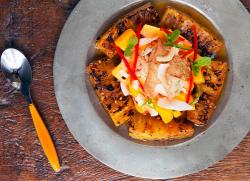 Bonapeti’s bottom line adds up to interesting and palette surprising food made using fresh and seasonal ingredients that just happen to be extremely good for you. If you’re bored with your daily sandwich or looking for a way to spice up your diet without involving rice cakes or kale crisps, these innovative, ever changing dishes might just hit the mark.

The Bonapeti menu changes regularly and seasonally, and the selection of two main courses, one side and one dessert, changes daily.  There are vegan options, raw dishes, and’free-from’ dishes for those wanting to avoid wheat, gluten, dairy and nuts.  Bonapeti launches for deliveries initially in central, West, North West & South West London postcodes, and also welcomes collection from its Battersea kitchen.  Delivery will expand across London in 2015, then to key UK cities. See www.bonapeti.com for more details.