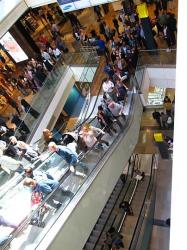 It’s a bit eerie at Westfield Stratford, thousands of people all walking in the same direction and with the same expression on their face. ‘Day of the dead,’ says M glumly as we watch from behind the safety of our security barrier, He’s right the resemblance to zombies is undeniable, although to be fair most zombies wouldn’t be seen undead in a shell suit and many have better complexions.

It’s opening day at Westfield Stratford City. Some pedants have argued a city has to have a cathedral and Stratford doesn’t but they are missing the point, it does have a cathedral or at least a large temple of worship and it’s this new shopping centre.

The faithful have turned up in massive numbers, are they all skipping work or are they all unemployed? If the latter how will they afford to shop here? Questions unanswered when Boris Johnson clambers shabbily to his feet to deliver a characteristically up beat and witty opening speech. His jokes about Chaucer may go over a few people’s heads but at least he doesn’t patronise the crowd with jargon-filled rubbish the way Ken would have done.

And then with a mighty whoosh of sparks and a distinct smell of burning, Nicole Prescovia Elikolani Valiente Scherzinger takes the stage. I have to ask who she is, in the manner of a High Court judge, but she’s impressive. Smart and hard-working routines suggest she put in the hours rehearsing. The TV crane camera swoops and skims over my head in a way that has me ducking involuntarily but all the same, yes Nicole, I do rather wish my girlfriend was hot like you. 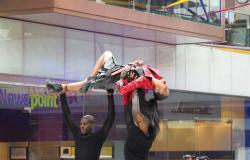 We, the beautiful people, are then whisked upstairs for a sushi feast and M comes too, although he knows his pass is the wrong colour. We get as far as the last elevator before I realise he’s no longer with me, and as I rise into heaven I see him down below being led away by burly security.

It’s like The Great Escape, I’m on my way to Switzerland and he’s going back to the Gulag, or at least to the Media Centre where there are some free snacks on offer. He waves at me bravely and then disappears from view

Several Californian rolls and glasses of champagne later, and with the imminent danger of the Secretary of Culture making a speech, I slip out of the VIP lunch to go see the food ‘outlets’. It is, after all, why I am here and I am a professional. The crowds have finally been allowed into the food areas and its as frenzied as the statistics on offer.

There are over 50 food outlets on offer, a staggering choice in such a relatively small area and its disappointing to see the busiest of all is McDonalds down in the rather down market area of the Arcade Food Court. The aroma of their chips is rather unpleasant.

You’d think people would at least try something different, today of all days but no – second busiest seems to be Nandos. The local demographic is big on burgers and chickens obviously but then I could have told the developers that back in 2009.

In the Loft ‘casual dining’ area are Giraffe, Gourmet Burger Kitchen (GBK), Jom Makan, Las Iguanas, Nandos, Pizza Express, TGI Friday, Wagamama to name a few. While down near Waitrose The Great Eastern Market aims to sell food from across the world.

The Gourmet Burger Kitchen, the middle-class Maccy D is doing ok but I’m more interested in seeing how two of my favourite small operations are doing. Franca Manca and Pho up in the posher Balcony area. 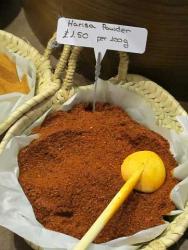 I know the couple behind Pho phrom their phirst place in Clerkenwell, our offices were around the corner and we instantly loved their fiery soups. Since then they’ve opened up further branches and have come a long way. This new Pho is open-kitchen and humming with staff, whereas the first one had just one cook beavering away in the basement. It seems to be doing a good trade and will do better when the weather gets colder.

Franca Manca began near my home in Brixton in the Arcade. Their sourdough pizzas cooked in a wood oven and served with cheap, gutsy red wine, had queues every lunchtime and for good reason. They then opened a second branch in much more upmarket Turnham Green and now here they are in Westfield. I never found the Turnham Green pizzas tasted as good as the Brixton ones, although there was no logical reason why they shouldn’t. Maybe it was the air? Again they seem reassuringly busy.

A sociologist could no doubt spend many happy hours seeing how shoppers divide on their food choices here, it is of course a class divide. You can spend as much or as little on food as you want at Westfield, but I imagine little will be the watchword for most shoppers. This isn’t Shepherd Bush after all.

These mega malls and their mega food choices are undoubtedly a part of our future, personally I find shopping stressful enough without being offered a choice of 50 places to eat. There are some good names at Stratford City Westfield though but only time will tell if they can all succeed and how many of today’s zombies will turn into cash cows.