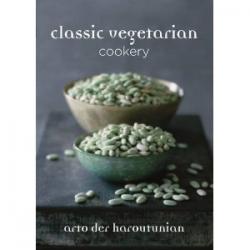 Like many people my flirtation with vegetarianism ended with the waft of a bacon roll. Working in advertising I was frequently on film sets at ‘sparrow fart’, as times before dawn were called, and when you’re hungry, cold and hungover a bacon butty is irresistible.

There was also the dawning realisation that the girlfriend, who was the real veggie, was frying everything in order to make it tasty and I was ballooning in weight. This was the 1980s you understand, we knew more about Rick Astley than we did about eating a wholesome diet.

It was clear though even then that the tastiest vegetarian meals came from the East or Middle East. Those cultures had long traditions of eating vegetables as something more than a boring side dish and could do things to them that made them stars in their own right.

Classic Vegetarian Cookery has been unavailable for almost 20 years, the author Arto der Haroutanian can now be seen to have been ahead of his time. An Armenian by birth he was brought up from the age of 12 in the North West of England and was a painter of international distinction, as well as the owner of a chain of hotels and restaurants where Armenian cookery featured.

He wrote over 12 cookbooks featuring the cuisine of the east and this, like them all, is beautifully written in a way most chefs can only dream of. Vegetables were of course available in the 1980s, but today we have access to so many more. Because of this Arto’s book is more useful than ever.

Laced with appropriate quotations from around the world and full of fascinating asides, the book has recipes from all over but not a single picture. This is unusual but understandable. Pictures put the cost up and mean less space for the meat of this vegetarian book, the recipes. There are over 200 of them making this an almost bottomless source of inspiration.

The shame is that Arto died in 1987 at the terribly young age of 47. Had he been around today he would have been delighted to see how easy it is buy every kind of vegetable and would undoubtedly have been continuing to write cookbooks that are already classics to the cognoscenti.

This reissue is timely and should be sought out in case, by some mischance, it is ever allowed to go out of print again.