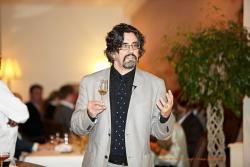 The Whisky Exchange Whisky Show takes place this year at Vinopolis on the weekend of 6th-7th October. The idea is to show how whisky can be paired with a harvest basket of foods.

Events will include a two-course whisky-inspired meal in the Show Brasserie, as well as ideas on the art of matching whisky in the Food & Whisky Pairing room. Whisky and food writer Martine Nouet will also offer a series of food and whisky pairing masterclasses throughout the event.

As a chaser to the show, and in honour of the wee dram becoming increasingly modeish in India, the Bombay Brasserie held a whisky and Indian food pairing event with dinner cooked by Michelin starred chef, Sriram Aylur. Its aim? To offer an alternative to the common Western perception that Ã¢â‚¬Å“a good curryÃ¢â‚¬Â needs to be accompanied by gaseous volumes of laaaarger. 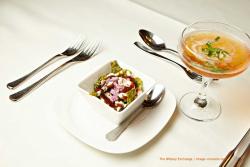 One benefit of having whisky with Indian food is that not only does the complexity of whisky match the intricate spicework, it also doesn’t fill you up in the way beer does.

In the vast, airy conservatory of the swank Bombay Brasserie, we started with a peaty single malt Indian whisky, Paul John, followed by award-winning bartender Ryan Chetiyawardana preparing us a nicely-balanced cocktail with a bitter turmeric liqueur.

Ã¢â‚¬Å“I wanted to the drink to be challenging,Ã¢â‚¬Â he says, Ã¢â‚¬Å“there were lots of drink enthusiasts present and I wanted a drink that mirrored the complexity of the whiskyÃ¢â‚¬Â. 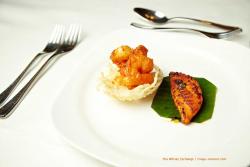 We found that a very popular blended whisky, in this case Johnny Walker Blue Label, when paired with an excellent creamy but firey pan fried tilapia, had the unusual effect of acting like yoghurt and calming down a burning palate. Other whiskys chosen to accompany the food included a Ardbeg Uigeadail.

Food writer Dave Broom was in the house. He said that people in the UK could be a little snobby about how they drank whisky and what they mixed it with: Ã¢â‚¬Å“This is probably the country with the most hang ups with whiskyÃ¢â‚¬Â¦ in India, you’d have it as a highball with soda,Ã¢â‚¬Â he said.

Our mains of dal tadka and aloo katliyan (potato with cumin, garlic and ginger) were very good. Lamb roganjosh was elegantly spiced but nothing special and the chicken biryani was tasty but personally, I prefer boned meats in biryanis for extra flavour.

The whisky that accompanied this course was an Irish Barry Crockett Reserve, single malt and aged in American oak casks. Surely these were gunpowder casks, because as well as a custard flavour, this rye nearly blew my tongue out, flaming up the chillis in the food. However, it was quite a novel sensation so I carried on burning.

Ryan says: Ã¢â‚¬Å“The idea was to challenge the idea that whisky lends itself to richer style drinks only, or that it needs to be sipped neat after dinner. I wanted a drink that would serve as an aperitif, and do so in every sense of the word. The idea was that it would stimulate the palate and the stomach in advance of a big meal.

Ã¢â‚¬Å“I wanted to also include some of the flavours that would follow. Many of the spices used in Indian cooking are natural digestive stimulants so there was a great connection, and I wanted the flavours of the drink to lead naturally into the first course.

Ã¢â‚¬Å“As a result, I paired the Eagle Rare with Cocchi Americano – it’s a sweeter style white vermouth but has the bitter herbs – and crucially the quinine to give depth. It gives a great contrast to the spice in the whisky – lifting the fruitiness and providing a bridge between the flavours of the whisky and those I created in the liqueur.

Ã¢â‚¬Å“The liqueur was a bitter turmeric liqueur- again utilising herbs and spices that would stimulate digestion, compliment the whisky and also link into the food. It used a combination of fresh turmeric root, coriander seeds, juniper berries, cassia bark, cardamom and citrus peels amongst others. I wanted to the drink to be challenging- there were lots of drink enthusiasts present- and I wanted a drink that mirrored the complexity of the whisky.

Ã¢â‚¬Å“This was all shaken together to create a lighter feel to the drink and finally served straight up with some shredded basil. Again, basil is a great digestive stimulant, but also provided a fresh, greener note on the nose, but also some of the spice that picked up the notes from the Eagle Rare, Cocchi and the liqueur.Ã¢â‚¬Â

Dry shake all ingredients without ice then shake with cubed ice and double strain into a chilled cocktail glass. Garnish with an orange twist.

Ryan says: Ã¢â‚¬Å“This is a simple, sour style cocktail with an extra zestiness that works to lift the nutty notes from the whisky. Soft and clean, with a great depth of flavour.Ã¢â‚¬Â

This is, Ã¢â‚¬Å“an unusual combination, but one that plays to the sherried, smoky sweetness of the whisky. Rich, spicy and sweet – a drink that can stand up to being drunk with food,Ã¢â‚¬Â says Ryan.

Shake all ingredients hard, double strain into a chilled cocktail glass. Garnish with a cherry.

For Ryan, this is, Ã¢â‚¬Å“a perfect drink to demonstrate how whisky can be an aperitif too. Dry and clean, this drink is perfect before dinner or with some light bitesÃ¢â‚¬Â.

Briskly stir all ingredients over ice and strain into a rocks glass filled with ice. Garnish with a lemon twist.