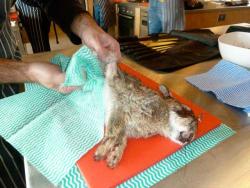 Using a J cloth to remove the delicate tissue of a rabbit was only one of the skills taught on River Cottage’s Wild Cookery Course.

TV presenter, chef and tutor Tim Maddams, packed loads more into his Wild Cookery day. We learned to forage and identify around seven fruit and herbs, fillet a mackerel, skin, joint a rabbit and pluck and debone a partridge. He also gave us a whistle stop tour of hot-smoking and meat-curing.

And with our foraged finds, we cooked: a mid-morning snack Ã¢â‚¬â€œ very tasty Ã¢â‚¬â€œ of fried mackerel with chanterelles was balanced wonderfully with lemony wild sorrel we’d just foraged from the fields. We made pasta with a ragu fried up from our own prepared rabbit with tomato, garlic and again, lovely sorrel.

And we pan-fried our partridge in a great autumnal dish, with those field chanterelles’ meaty orange gills matching the meat of the bird and the strum of squash that accompanied it.

We started our day with about 15 keen amateur cooks piling into a blue tractor trailer to be rolled down the path to the new cookery school premises overlooking bucolic Devon countryside. 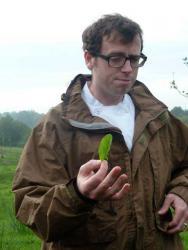 First Tim first led us on a foraging walk around the 65 acre organic Park Farm where the cookery series, River Cottage is filmed.

I spent most of this time in vain straining for signs of Hugh Fearnley-Whittingstall Ã¢â‚¬â€œ were those his wellies slung casually against a bucket in the greenhouse? Was that his back wisping across the kitchen windows of the cottage?

Disappointed, I learned he’d never lived here; he lives over the meadow and this was corporate River Cottage HQ, home of many cookery courses, central offices and, as mentioned, the studio set. But never, mind, it was plenty of fun plucking wild blackberries and dog rosehips from Hugh’s bushes.

Tim showed us how to recognise wild sorrel, oak moss (apparently it’s great fried), parasol mushrooms and elderberries. Fascinatingly, we learned never to eat uncooked wild water cress because it can kill you because eggs laid on it by some exotic snail can poison your liver and work their way up to your brain, unless the water the cress grew in has been fast running. I was, unfortunately, violently sick after eating my foraged fruit so something naughty probably snuck into my basket. Be careful!

Once back in the kitchen, we were shown how to fillet a mackerel using line-caught fish from nearby Lyme Bay Ã¢â‚¬â€œ where else? This involved slipping the knife behind the gills and paring off two cheeks without digging too far into the spine.

Although the river cottage helpers Ã¢â‚¬â€œ and there were loads of smiling ones Ã¢â‚¬â€œ had kindly gutted ours for us, I learned not to stir around the inside vent when gutting a mackerel because it dissipates the digestive chemicals through the fish, causing it to autodigest. 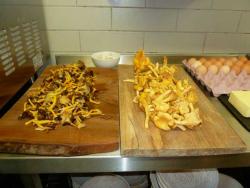 And who knew? I didn’t, nor did I realise that pelagic fish such as mackerel are panicky fish. Either hunting or hunted, they live life frenetically, always shivering in fright which brings their oily energy reserves to the surface for immediate action Ã¢â‚¬â€œ and makes them oil-slicky, as opposed to the great, white lazy fish who wait for matter to mash into their mouths.

Tim was great in balancing interesting facts, presenting ethical arguments for eating whatever wild food we were cooking, being entertaining and showing us skills. He justifies the use of animals such as pigeon, rook and rabbit as being Ã¢â‚¬Å“accidentally farmedÃ¢â‚¬Â and so fair game. Commercial agriculture, he says, has led them to thrive, gobbling up farmers’ harvests and becoming, in their eyes, a nuisance. 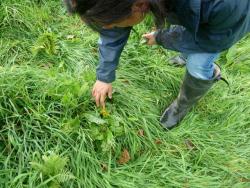 He then showed us how to pluck and bone a red-footed partridge which we did within little tents made from black bin bags to stop the feathers messing up everything. But save a few half-hearted attempts, I couldn’t do it and instead found myself marveling at the beauty of these birds.

How often do you come so close to a whole feathered, freshly dead bird? They’re normally plucked, trussed and prepared for the supermarket, presented as far as possible from their natural state. This one had soft tortoiseshell-patterned down under its magnificent wings and a speckled, broken neck. I’m not sure wild hunting is for me, really.

Back to the J cloth and the rabbit: this was just one of the new skills I learnt. I say learnt but I’m afraid I was too squeamish to partake of skinning the rabbit. Interestingly, Tim eschews the age-old practice of hanging game to deepen its flavour as he says this just tastes of rot. Instead he believes rabbit and partridge Ã¢â‚¬â€œ and other game Ã¢â‚¬â€œ taste much better and more true when cooked fresh.

Once we Ã¢â‚¬â€œ and this is the royal’we’ Ã¢â‚¬â€œ had pulled back the stomach flaps where the rabbit had been gutted, you could peel the skin back on each side of the animal to reveal its skinned, skinny torso.

I was amazed at how lean the rabbit was once its lovely fluffy fur had been removed Ã¢â‚¬â€œ long, like a reclining athlete. We cut it into three pieces, putting aside the hind legs for a ragu later and curing the saddle Ã¢â‚¬â€œ the best bit Ã¢â‚¬â€œ in sugar, salt, bay leaf and peppercorns, which we later hot-smoked outside over oak chippings. 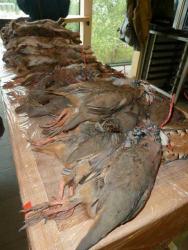 Tim really multi-tasked us. At the same time we were making a crÃƒÂ¨me catalan with cream, vanilla pods, butter and sugar, plus the elderberries we’d foraged earlier. This later proved delicious, although bits of fur at the time were making their way into the ramekins Ã¢â‚¬â€œ a hazard of cooking with wild foods at a single workstation. We also managed to soufflÃƒÂ© them by keeping them in the oven too long.

Finally, at about 4pm, it was time for our late lunch and we skiddadled rabbit ragu with tomato and garlic as a starter before eating a lovely light stew of pan-fried partridge breast and legs with rabbit stock, chanterelles and sorrel.

Although it was a very structured day, Tim alters the course according to what wild foods have been caught that morning. The skills he showed us, plucking,skinning, filleting and foraging, were all transferable.

My one suggestion for improvement, however, would be to provide basic guides as we were expected to go cook after only a quick demonstration and I found we simply forgot what he did. 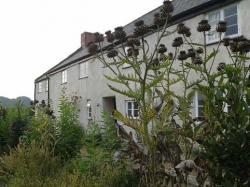 Granted, instructions can be fiddly and boring but at one point, we were making a pasta, its sauce, pan-frying partridge and blowtorching our pudding all while trying to eat bits of our lunch Ã¢â‚¬â€œ and without written guidance, it was a bit much.

But there was loads packed into the day and lots of little tips that we could, if we wanted, take home and build on according to interest. One interest will though, not now nor will ever be,  to ever use a J cloth in that manner again. I’ll keep mine for polishing tables rather than rabbits I think.