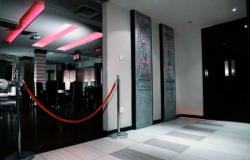 Avalon is a modern, exaggerated bar/club located on the High Street of Shoreditch. The surrounding area is infamous for its off the wall trend setting and animated nightlife, drawing a jumbled crowd of rather comic-book character style individuals.

The guest list for Avalon on the opening night brought together the Shoreditch elite, the crème de la crème of the new age eccentrics, complete with plastic lobster hats, an abundance of Mardi Gras style beads and alarmingly shallow conversations.

Fear not, for I had come prepared by bringing along The Bedford Ninja, who was more than capable of vanquishing any foe should they utter the words, ‘who says that these days”, ‘omg, what is she wearing”, or the dreaded, ‘don’t even go there, girlfriend”

There was no room left to check my coat, despite having arrived one hour after the doors opened. Odd and rather unimpressive but still, having given them the benefit of the doubt, I continued through to the bar, located behind a freestanding wall. 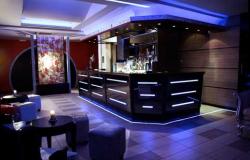 Behind the wall I laid eyes upon the bar area for the first time, laying witness to a plethora of thirsty punters, approximately four deep at the bar. Unfortunately the rest of the oddities who had been able to get a drink decided to set up base behind those queuing, creating an almost impenetrable wall of pretentiousness. The whole place was bathed in red light, making it hard to see the décor. Time to unleash the ninja.

We swiftly made our way to the front of the bar thanks to the ninja stealth moves, slipping into gaps. We were eager to sample some of the food and drink that this ‘Asian influenced’ venue had to offer, and it doesn’t get more Asian than Corona Beer and Jagermeister. Never mind, at least the two bar staff, deemed to be able to cope by themselves for the evening, were pretty efficient.

The main room was only slightly larger. A stage, raised up by the height of a brick, took up the majority of the space. A neon green lighting effect, chosen for this room, was much brighter then the red. There wasn’t much going on in the room, so we left, and crossed the hall to the V.I.P. Room, finally getting a chance to sample one skewer of prawn and chicken in a Thai coating on the way. Pleasant tasting, but nothing to write home about and could quite easily be rivalled by the same product from a supermarket.

Eureka! Another bar in the V.I.P. room! Now things were looking a little more positive. The ninja spotted a route to the front of the bar. Yet again we were immersed in red lighting, this time not so overpowering, allowing the eye to catch a glimpse of the impressive, Asian influenced, lavish surroundings.

Avalon grew on me as the night progressed, but a couple of things still spoiled my evening. A packed guest list meant that the venue was too full and made moving around almost impossible. Then there’s the lighting, which baffled me. If your main clientele are the colourful array that Avalon will presumably attract then covering everyone in red lighting, which not only dulls outfits but also conceals the luxurious décor, seems a wrong decision.