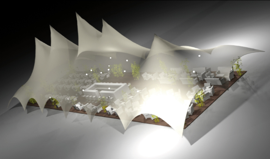 The well-known River Terrace Café at Somerset House has been completely re-designed to become Tom’s Terrace when it opens on 29 April. Underneath a futuristic canopy diners will enjoy protection from the London summer whilst enjoying stunning views of the river Thames.

With an informal, relaxed, al fresco-style menu created by Michelin starred chef Tom Aikens, Tom’s Terrace will be a new addition to open-air restaurants in the West End. The menu will include Tom’s Kitchen Tasting Board (which includes Coronation Crab Salad, Mini Burgers and Tartine of Red Onion and Aubergine Compote), Grilled Paillard of Chicken Salad, Hot Smoked Loch Duart Salmon and a delectable range of desserts such as Eton Mess and Mango Rice Pudding.

The existing Admiralty Restaurant will be transformed into ‘Tom’s Kitchen at Somerset House”. Tom’s Kitchen restaurant in Chelsea has been a remarkable success (apart from annoying the neighbours, which wont be a problem here) and the concept, including the menu, will be unchanged in the larger, grander surroundings of Somerset House serving signature dishes including Daylesford 7 hour Confit Lamb and Spicy Crème Brulee. The Deli will sell a selection of lighter fare including Lentil and Goat Cheese Tart, Parma Ham and Artichoke Pissaladiere and Roast Chicken, Grape, Endive and Walnut Salad.