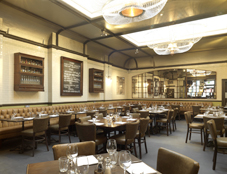 The launch of The Avalon, at 16 Balham Hill, was a very impressive occasion. A ten minute walk from Balham Station, and a stone’s throw from Clapham Common, this newly refurbished bar restaurant is quite imposing externally but when you walk inside, the Victorian style lighting throughout and minimalist, almost utilitarian white brick tiling to most of the walls makes the place look even bigger. The dining area has two magnificent chain chandeliers suspended from the ceiling and copies of Victorian press cuts set into the tiled walls. Named after the Isle of Avalon, from Arthurian legend there is an eclectic mix of seating and décor including a wallpaper mural depicting an Arthurian scene in the bar area.

For the launch, we were greeted with drinks and the waiting staff kept their eyes peeled for guests empty glasses replacing them swiftly with cocktails, wine or other beverages, others circulated the bar and the dining area with trays of oysters, prawns with a squid ink mayonnaise, smoked salmon and smoked duck canapés, stuffed tomatoes, goujons of deep fried fish and chips among many others – all good stuff and if an indicator of the fare that will be on offer in the restaurant, it would be well worth going there for a drink and a meal. I would say that, in any event, it’s worth going there for a drink and to take in the optical illusion created by the décor, you won’t be disappointed.