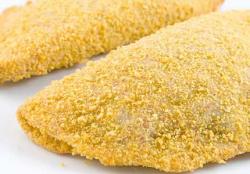 As a kid, we would all tuck into foods that, perhaps, we don’t really indulge in as adults anymore. Sometimes it’s because we outgrow them and other times it’s because they were discontinued and we forgot about them. Well fear not my friends because one of the nation’s favourites is soon to be back in Supermarkets and if like many people in the nation, you were missing Findus’ chicken curry crispy pancake, then you will be pleased-as-punch to know that as of April, these orange-crumbed half-moons of wonder will be back in our lives.

How did it happen? Findus launched micro-site as well as a Facebook group for fans to share nostalgic memories and more and more people began to demand the return of the chicken curry, prompting a re-launch by Findus.

Findus Crispy Pancakes were recently voted the number one retro food brand in the UK in a GMTV poll, firmly securing their positions in our hearts. As with a lot of retro foods, they often come with a touch of the Marmite-Factor, because you either love them or you hate them and if you are some fancy-pants gourmand or culinary wizard, then public declarations of your love for things like ‘Heinz Salad Cream‘ and ‘Supanoodles’ may be enough to make you run for cover. But if ‘Pot Noodles’ are good enough for Heston Blumenthal, then we are not too stuck up to come forward and declare our love for all things ‘Crispy and pancakey’, especially those of the Findus persuasion. Long live nostalgia!

Findus Chicken Curry Crispy Pancakes will be available in most major supermarkets across the UK from April 2010, RRP £1.39.