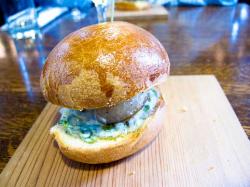 A Foie Gras burger won Taste of London’s Best Dish this year, a decision that must have had all the other chefs there ripping off their toques and swearing like Gordon with a stubbed toe. All those years practising their craft just to get beaten by a burger?

Pascal Aussignac, the ‘auteur’ of this burger is a great chef and being a Gascon man he loves his foie gras. A few years ago he tried to sell an earlier incarnation of the Foie Burger into the newly opened Westfield. The local market wasn’t ready for this though; a burger that didn’t come in a Styrofoam box caused them to make gun shaped hand gestures and start rhyming things. So the foie burger was relegated to the subs’ bench until its rebirth and triumph at ToL.

Now I like foie gras and I suppose I like buns. So foie gras in a bun should be a winner for me too. With the ToL mini-foie gras burger now on the menu at Comptoir Gascon, along with a main course of duck burger, it seemed time to find out.

After a delicious little cream cheese amuse up came the famous foie gras burger. It was in a brioche bun, which made my heart sink straightaway. What is it with people putting burgers in brioche? Brioche is way too sweet a bun for burgers, yes it has the right texture for a burger bun – soft enough to get a good grip on and not fall apart halfway through- but that’s all. Brioche is technically a cake or pastry after all.

On first bite I’m very tempted to whip out the foie and lob the bun in the bin. It’s masking the foie’s flavour with a sick sugariness and not bringing it out as say, a sweet wine would do with an underlying acidity. Also on board is a cheese, which swiftly melts to the consistency of milk and drips out all over the place.

I can’t believe this is what ToL judges went gaga over, were they all on drugs or drunk or both? I feel sorry for the bird that gave its swollen liver to create this oddity whatever the story. K is none too impressed either, ‘it’s not really anything much is it?’ he says, eyeing his own bun dolefully.

We both eat the burgers in a few bites, £18 worth of food has never gone so quick or to so little effect. Maybe the problem was in the cooking and not the concept because the duck burgers that follow have bones in both of them, a lot of bones. ‘I really hate biting with trepidation,’ says K indistinctly whilst removing a two centimetre example from his mouth with clear distaste, ‘I mean that’s what burgers are for aren’t they? Easy eating?’ I agree. I can’t imagine chef really intended to add bones to the burgers so maybe someone is just not on the ball in the kitchen today.

The pieces of onion caramelised in balsamic vinegar are also way too big and way too sweet, especially when combined with yet another blasted brioche bun. As for the duck meat itself, a mixture of confit leg and breast, all I really got was confit in mine. That’s where the bones all came from too of course. It’s a bit off-putting overall, the confit texture meat just isn’t ideal for putting in a sandwich.

In fact both burgers seem wrong in just about every way. The ingredients, bones excepted, are fine individually perhaps but the combination is verging on unpleasant and even a bit sickly. The novelty value has no appeal to me, nor does the ‘in your face’ pricing, which makes them a posh parody of burgers and their historic place in the nation’s food chain.

Obviously the ToL judges saw something different so you may well want to gamble £9.00 for yourselves. I wouldn’t recommend it though. I know Comptoir Gascon can do, and normally does do, far, far better food than this.