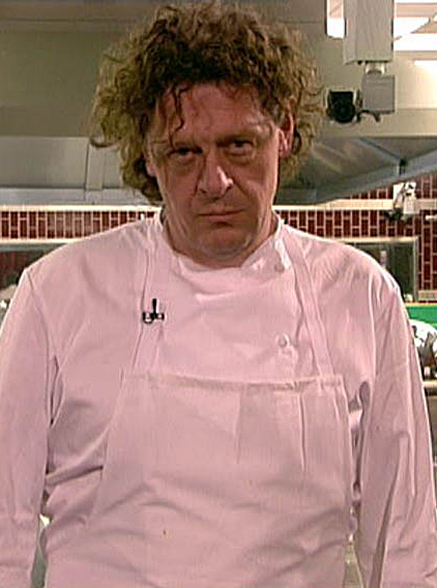 It’s taken me a week to get over the hole in my life that is Hell’s Kitchen I began watching from the terylene embrace of a cheap bed in a hotel room in France and, thanks to Mr Tivo, watched it here when I came home late every night.

Now to say it wasn’t about cooking is to make the same kind of astute observation that the Pope isn’t a Muslim or that bears have al fresco sanitary arrangements. Of course it wasn’t about cooking, I don’t recall ever seeing a menu and all I know of the food is that there was some asparagus, some crab and some mash. Logically too, I know that 3 people can’t run a kitchen for 60 covers and so all the time a small army of pros was working behind the scenes. No this was essentially Big Brother for people that don’t breathe through their mouths and it worked

Dear old Marco Pierre White has always had more ham than Parma and here he was in his element. Nobody else could get away with such terrible acting but he succeeds because he does it so shamelessly. What was more interesting was to see him when he didn’t know he was on camera, in the background happily chatting to Ade Edmonsdon and clearly enjoying himself and the people around him. I don’t think he really cared a toss whether people got fed or not, none of them were paying and all had come with the knowledge that they were participants in a TV show not diners on a night out.

His protestations that he understood the chav actor and his behaviour sounded false – the little kid was an arsehole from day one and while MPW may have been difficult in his youth I can’t believe he was ever so stupid. He just wanted to remind us of his rep as one of the first of the bad boy chefs, the man who pretty much made Bob Carlos-Clarke’s career (the famous photos were hung around the walls to remind us that MPW wasn’t always so thick about the waist).

As for the contestants (what do they win?) it was obvious that Bruce Grobbelaar would provide no real entertainment being as he was mature, calm and capable. I don’t imagine there are many jobs he couldn’t succeed at given a few days training. He really had to go. Anthea and her husband gave an insight into how people with little talent but one for having strops can push their way to high positions in TV and Gary Linneker’s temptress was a blank canvas who, with hair and clothes reduced to nothing, was actually a bit plain. Ms Dynamite (tee hee) just wanted to talk about her head and where it was at – a diversion from acknowledging her faults. A classic scene that is played out in inner-city classrooms every day, or so my teacher friends tell me.

Ah but Ade and Linda eh? It’s a shame that Ade has stopped blowing himself up, swearing and fighting with Rik Mayall and now contents himself with bit parts in dodgy soaps but there is still some of the old sparkle there. His experience as a film director obviously helped him when it was his turn to control the pass. A film set is a place where if people don’t shout then nothing gets done, as there are invariably three times as many people there as is necessary and many of them are in a Union and won’t do a single thing more than they have to. He should have won on pure kitchen ability.

There was no doubt that Linda Evans would win when it came down to the public vote. The English pretend to love their old people, making cooing noises of appreciation over them and especially at Christmas, but in reality we shove them into wing chairs in care homes before you can say Sanatogen Smoothie. Linda , while not being all that old, was certainly older than anyone else there and whilst clearly struggling to keep up remained calm and didn’t throw any Diva fits. The public warmed to her.

MPW got a fat cheque to go with his revenue from advertising stock cubes, and all of us food writers who were once, or in some cases still are, advertising copywriters will agree that the company concerned got its money’s worth, even if they did run the same damn ad in every break. His heart is now, like Jamie’s and Gordon’s, more into TV than a hot kitchen though. He looked bored a lot of the time it has to be said. It was never a real kitchen and that took his fire away.

It was fun while it lasted. Some careers will have been helped and a couple thrown into question. If ITV want to cook up another series next year, I for one will be watching waving a wooden spoon angrily and drinking a piping hot cup of vegetable stock.