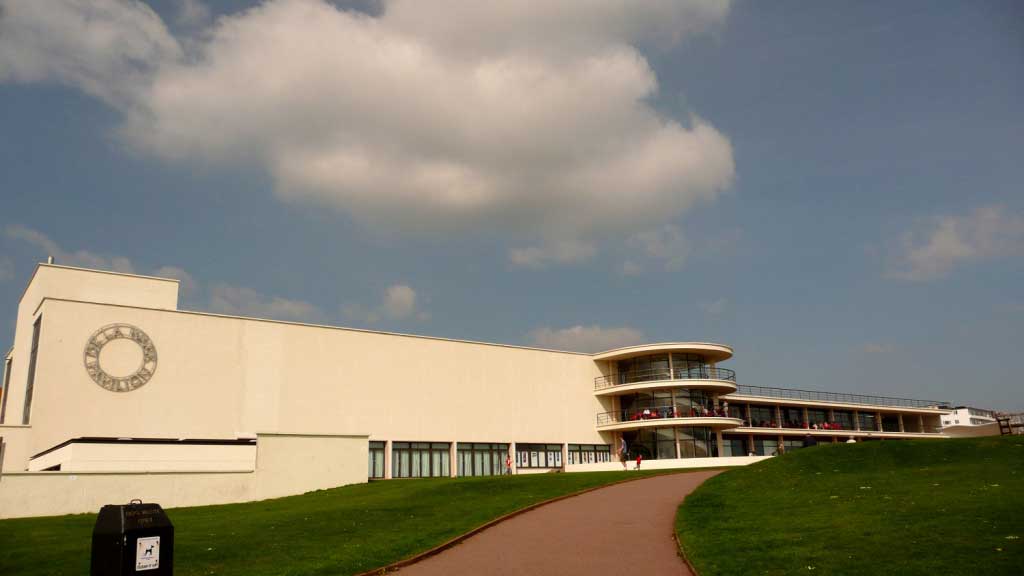 I find the great outdoors mind-numbing. Buildings fascinate me far more. Above all I like the flowing lines of Modernist architecture. It might sound strange, but I take a sense of optimism and calm from the purest expressions. And if the bank made an error in my favour, my dream home would fuse the sleek facade of a Corbusian villa with the curvaceous, liner like interior of Eltham Palace.

Divorcing the location, the result would come close to Bexhill on Sea’s ‘horizontal skyscraper’, the De La Warr Pavilion. This ‘palace of the people’ built to improve them was the vision of the town’s socialist mayor, 9th Earl De La Warr. As with other brave buildings like London’s massively built St. Pancras Chambers and Glasgow’s forthcoming Century School of Art, a competition determined the design. In keeping with Warr’s desire for a fashionable resort, his only stipulation was that ‘it should be light in appearance’.

From 270 entries, the heavyweight winners of a local contest were expressionist architects, Erich Mendelsohn, a German Jew who fled to Britain fearing the Nazis, and Chechen born, Serge Chermayeff. In ‘1066 country’ their streamlined design is as startling now as on completion in 1935: a shimmering cuttlefish bone expanse of concrete and plate glass woven by steel. Function followed form with de-misting hot pipes running along windows. Housing a theatre, restaurant, library and lounge, it inspired the Royal Festival Hall and Sydney’s Opera House. On seeing it, Irish playwright, George Bernard Shaw quipped, ‘Bexhill has emerged from barbarism at last…’

When I first stumbled across it, even badly neglected I found a sense of luxury in its terrazzo floors and futuristic staircase (as seen on ‘Poirot’). Ten years on and an £8million refurbishment has cured the grade I pavilion of concrete cancer, asbestos and well-intentioned but anarchic 1960’s ‘amendments’. The sun deck has reopened. The theatre plays a programme that reaches beyond gruesome panto. Redefined galleries showcase provocative work, including an irritating exhibition of pixelated sea views, which masks the real one.

I was curious to see whether as much attention had been lavished on the restaurant, which ten years ago fed off Portakabin kitchens squatting in the car park. Bypassing retro Piesporter for a flute of hedgerow scented ‘Carr Taylor’ Hastings Brut, I took in the hard-edged room – formerly the ‘sun parlour’. A dynamic mural by Vorticist painter, Edward Wadsworth unravelled a galleon stylised like a sextant. Newly commissioned persimmon-coloured chairs clanked and looked nursery.

Bread was focaccia like, but better built with chewy sides – a moreish British take on the Italian staple. Starters were invigorating, although salmon tartare with soft-boiled egg was just chopped smoked rather than sushi grade. Dill weed sauce was fresh and precise. Whilst my companion’s trout was overenthusiastically smoked, the sweet Granny Smith segments in a salad glazed in cosy balsamic were endearing.

Somehow my tall lamb rump with roasted vegetables and sauté potato resembled Wadsworth’s mural. It was succulently pink with addictive rosemary and apple spiked gravy. Crisp confit duck leg came with pear, down-to-earth beetroot and warm, juicy, salty lardons. Only the undercooked fondant potato pat let the dish down. ‘Real chips’ were far from the humble specimens marinating the air along the esplanade – to the touch greaseless and scorching. Perfect seasoning prevailed.

A whisky glass of homemade Cointreau ice cream was, Cointreauversially, an advance on the liqueur. On ordering a bracingly bitter macchiato I remembered a recent establishment where the waitress answered my request with ‘I’ll check with my manager to see if we’ve got any left.”

I gazed towards the beautiful but sinister Beachy Head, where a direct line links The Samaritans. Fortunately, this meal didn’t warrant a call. Whilst conventional (I doubt the residents of ‘God’s waiting room’ would queue up for Adrià) the food was generally well-executed and affordable. I am sure that revered cookery bully and former Bexhill resident, Fanny Cradock would have found favour. Curiously, staff seemed unsure how to deal with us, being the only customers young enough to enjoy use of our birth hips.

A socialist’s lavish beach hut that has endured bombing, requisition, threat of demolition and – worst of all – a takeover bid by Wetherspoons. Whitewashed for another generation of the blue rinses, even aged 74 it still looks spectacularly incongruous: more Hollywood than pebble-beached Bexhill on Sea. But despite grants and marketing and wholesome food, Mendelsohn and Chermayeff’s modernist masterpiece remains the most glamorous retirement home in the world.

By Foodepedia2 May 2009Restaurant Reviews